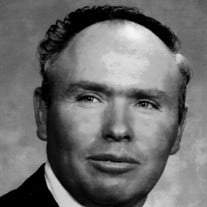 Denton Coleman passed from this life on April 21, 2018. Denton and his twin brother Denzil were born June 1, 1929 to Lorin H. and Elva Andersen Coleman. He graduated from North Cache High School and served in the North Central States LDS Mission, spending time in Minnesota and Ontario, Canada. He married Beverly Henrichsen on May 2, 1952 in the Logan LDS Temple and spent his life as a farmer and dairyman in Smithfield, Utah, moving to Lewiston Utah in 1961 where he bought a farm and expanded his dairy herd. He worked closely with his brothers Denzil and Lyle, helping them and sharing farm equipment. He also performed custom labor for many other farmers and hauled feed for a local grain company. Denton was an active member of the LDS Church where he served as a ward clerk, elder’s quorum president, Sunday school teacher, home teacher and high priest group secretary. He was a friend to all and led an honorable life of honesty, generosity and devotion to his neighbors, family and God. Denton and Beverly raised four children, all living in Utah: Robert (Janie), Washington Terrace; Judy, (Andy–deceased) Pedersen, Smithfield; David (Debbie), Lewiston; Debra Sue (David–deceased) Maes, Clinton; 11 grandchildren; 14 great-grandchildren; brother, Lyle (Joyce) Coleman; sister-in-law, Elaine Coleman; brother-in-law, Jerry (Beth) Henrichsen. He was preceded in death by his parents, his wife Beverly and brother Denzil. Funeral services will be held at noon on Thursday, April 26 at Nelson Funeral Home, 162 E. 400 N., Logan, Utah. A viewing will be held on the day of the service from 10:30 to 11:30 a.m. at the mortuary. Condolences may be sent to the family online at www.nelsonfuneralhome.com.

The family of Denton Hamer Coleman created this Life Tributes page to make it easy to share your memories.

Send flowers to the Coleman family.