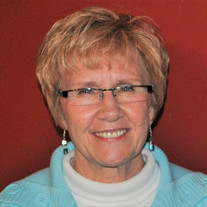 Diana Tout Esplin, 75, of Smithfield, Utah, passed away on April 7 in Logan, Utah of cancer. Diane was born in Ogden, Utah to Glen Miles and Phyllis Nilson Tout on January 16, 1943. She was raised in Smithfield with two younger sisters, Susan and Nanette. She graduated from North Cache High School in 1961, where cherished life-long friendships were made. She was introduced to her eternal partner Lyle Esplin, through her best friend Billie. Diane and Lyle were married on February 1, 1961. They began their life together living in Trenton and Smithfield, then moving to Hyrum. During their years there, they had cherished friendships and wonderful memories of times in the Hyrum Saddle Club. Diane and Lyle, returned to Smithfield and Richmond as their family grew from 3 to 7. At this stage in life, Diane decided it was time to go to school. She worked hard and graduated from Utah State University with a bachelor’s Degree in Elementary Education and began her teaching career, following in the footsteps of her mother. She influenced her students and instilled her love for geography, art and Utah History for 20 years at North Park and Greenville schools. She inspired all five of her daughters to return to school and achieve degrees. She was a wonderful mother, sister, grandmother, wife and friend. She was an accomplished cook and loved sharing with family and friends. Her delight was having family meals, cookouts, and birthday parties. Her specialties were homemade wheat bread and delicious cinnamon rolls. She never forgot a birthday. Diane served throughout her life in many callings as an active member of the Church of Jesus Christ of Latter-day Saints. After retirement, Lyle and Diane served as missionaries at Cinnamon Creek Camp for four years. She served as a temple worker at the Logan, Utah Temple. During her life she served as President of the Cache Teachers Assoc., President of Smithfield Historical Society, and an officer of the Daughters of the Utah Pioneers. She is survived by her husband, Lyle Angus Esplin and seven children, Jamie Andrus (Mark), Jodie (JaNan), Jackie Benavides (Mitchell), Jennette, JuliAnn Weber (Michael), Janell, Jeremiah (Alisa); 17 grandchildren and 10 great-grandchildren; and her sisters, Susan Michener (Edward) and Nanette King (Lowell). She was preceded in death by her parents, a grandson, Nicholas Benavides, a brother-in-law Edward Michener and nephew, Christopher Michener. The family wishes to thank Smithfield 7th Ward members for their compassionate service during her months of illness. Funeral Services will be held at noon on Monday April 16, at the Smithfield 7th Ward LDS Chapel, 50 E 200 S, Smithfield. A viewing will be held from 6-7:30 pm on Sunday at Nelson Funeral Home, 85 S Main, Smithfield and from 10 to 11:30am prior to the services on Monday at the church. The interment will take place at the Smithfield Cemetery. Condolences and memories may be shared with the family online at www.nelsonfuneralhome.com

Diana Tout Esplin, 75, of Smithfield, Utah, passed away on April 7 in Logan, Utah of cancer. Diane was born in Ogden, Utah to Glen Miles and Phyllis Nilson Tout on January 16, 1943. She was raised in Smithfield with two younger sisters, Susan... View Obituary & Service Information

The family of Diana Tout Esplin created this Life Tributes page to make it easy to share your memories.

Diana Tout Esplin, 75, of Smithfield, Utah, passed away on April...

Send flowers to the Esplin family.