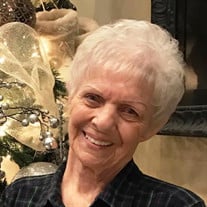 In the early morning hours of February 8, 2020, Diane Patricia Willis Davis Ames Panek passed away peacefully at home surrounded by her family after a valiant battle with cancer. She was born on May 31, 1932 in Pocatello, Idaho to Merle and Elaine Davis Willis. At the tender age of 18 months, her sweet mother Elaine passed away. Diane was lovingly raised and eventually adopted by her maternal grandmother, Hattie Gaunt Davis. She attended schools in Livermore, California and Boise and Pocatello, Idaho. She married her high school sweetheart, Melvin Cecil Ames on October 8, 1949. Together they were blessed with five daughters. After a few years, Cecil’s job took them to Bountiful, Utah. After their divorce in 1963, Diane was employed at Litton Guidance Systems, working hard to provide for her young family. On March 14, 1978, she married Norbert Lee Panek and moved to Holladay, Utah. In 1986, Diane took a medical retirement due to asthma. New adventures awaited Diane and Lee in 1996 as they sold their Holladay home and moved to Phoenix, Arizona. After Lee passed away on April 13, 1996, Diane relocated to her current home in Providence, Utah. Diane loved watching her family grow, and spent many hours selecting the perfect greeting card for each of her children, grandchildren and great grandchildren. The great grandchildren always looked forward to the crisp $2 bill that “Grandma Pancake” would put in their birthday cards. She also was very adept at texting, taking time to pick just the right emoji for her loved one. Diane loved Christmas with its family gatherings, good food, bright lights, shopping and many presents. Diane was preceded in death by her loving husband, Lee, her parents, her grandmother, her eldest daughter, Lee Ann Dillon, her first two grandchildren, Cindy Crowell and Lisa Copley, her great grandchildren Adam Crowell, Angel Archibald and Georgia Archibald, her sister, Merlene Saunders, and her first husband Cecil Ames. She is survived by her daughters, Barbara Paul (Bob) of San Antonio, Texas, Nancy Cardall (Alan) of Wellsville, Utah, Sheila Green of Syracuse, Utah, Sandra Ames (Lori) of Canyon Lake, Texas, son-in-law Thomas Dillon of Aurora, Missouri, and her sister, Karen Bogestad of Longmont, Colorado. Diane is also survived by 15 grandchildren, 54 great grandchildren, and 1 great-great granddaughter. A Celebration of Life will be held on Thursday, February 13, 2020 at 11:00 a.m. at Nelson Funeral Home, 162 East 400 North, Logan, Utah. The family will receive visitors from 9:30 to 10:30 a.m. Interment will be at Restlawn Memorial Gardens, Pocatello, Idaho. The family would like to express a special thanks to Rob, Alexis, and Steve with Tender Care Hospice for their gentle, attentive care of our mother during the final weeks of her life.

In the early morning hours of February 8, 2020, Diane Patricia Willis Davis Ames Panek passed away peacefully at home surrounded by her family after a valiant battle with cancer. She was born on May 31, 1932 in Pocatello, Idaho to Merle and... View Obituary & Service Information

The family of Diane Ames Panek created this Life Tributes page to make it easy to share your memories.

Send flowers to the Panek family.