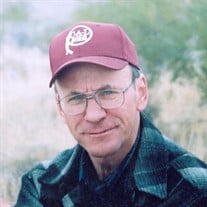 *A VIDEO RECORDING OF THE FUNERAL IS AVAILABLE ON THE TRIBUTE WALL* Dixon Lee Allen, 72, of Smithfield, UT passed away peacefully listening to his favorite song, “Master the Tempest is Raging,” Thursday, April 15, 2021. He took his last breath right along with the last note. This song always gave him peace in this life, and in the end, gave him the peace to move on from this life to the next. Dixon was born to Lloyd and Grace Forrester Allen March 21, 1949 in Ogden, Utah. He was the fourth of five children. Growing up in Hyrum, he attended and graduated from Sky View High School in 1967. On May 17, 1980 he married Diana Williamsen in the Logan temple, and together they raised five children. From his childhood and throughout his life, Dixon always loved being out in nature. He loved hunting, fishing, and hiking. He also enjoyed playing piano, french horn, painting, and learning. He was always reading a book and had a story to tell. His many stories of hunting adventures and childhood mischief with friends (and a few shenanigans he might have pulled later in life) are some of the highlights of family gatherings. Dixon loved to learn and gain knowledge. With that, he worked in many different fields, including the fire department, EMT, first responder, volunteer with MARS (Military Auxiliary Radio System) and other ham radio activities, Smithfield Tree Committee, but wanted to be most remembered as a carpenter. He was not just a carpenter, but a true craftsman and master of his trade. He made works of art through fireplace mantels and more, feeling as though he was helping to make a house feel like a home. He lovingly made hundreds of beautiful wooden works of art for his children, and later especially for his grandchildren. These are gifts that have been, and will continue to be, cherished by future generations of his family. Dixon was a member of The Church of Jesus Christ of Latter-Day Saints. He served in the Texas Mission from 1968-1970 and held various callings throughout his life. He loved to serve others, and loved genealogy and temple work. He spent countless hours indexing names for the temple and learning about his ancestors. Dixon is well known for being someone who was kind and helpful. He was always willing to teach anyone who was willing to learn, to pass on his knowledge and love. He was a great example to his whole family and those blessed to know him. Dixon is survived by his “wonderful wife and five wonderful children,” as he would say. Wife, Diana Allen and his five children, Dixie, Dennis (Marianne), Darcy Hardman (Nathan), Dee (Lindsay), and Dawna Hummel (Casey) and his ten grandchildren. Also his brothers, Ron (Carol), Randy (Diane), his sister, Cheryl Rock, and sister-in-law, Beth Allen. He was preceded in death by his parents, his brother Larry, and brother-in-law, Brent Rock. A viewing will be held Thursday, April 22nd from 6:30-8:30pm at the Smithfield First Ward building 175 South 100 West Smithfield, UT. Funeral services will be Friday, April 23rd at 11:00 am at the same location with a viewing from 9:30-10:30 preceding the service. Condolences and memories may be shared at nelsonfuneralhome.com

*A VIDEO RECORDING OF THE FUNERAL IS AVAILABLE ON THE TRIBUTE WALL* Dixon Lee Allen, 72, of Smithfield, UT passed away peacefully listening to his favorite song, &#8220;Master the Tempest is Raging,&#8221; Thursday, April 15, 2021. He took... View Obituary & Service Information

The family of Dixon Lee Allen created this Life Tributes page to make it easy to share your memories.

*A VIDEO RECORDING OF THE FUNERAL IS AVAILABLE ON THE TRIBUTE...

Send flowers to the Allen family.