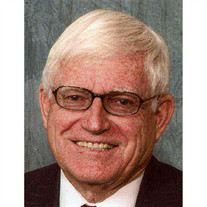 Garden City/St. George, UT – Don LaMar Garfield, 78, passed away Thanksgiving day November 25, 2010 in Salt Lake City, UT. He was born December 13, 1931 in Tremonton, UT to Jesse H. and LaVon Brough Garfield. Don was reared and educated in the Bear River Valley. He served a mission in the West Central States Mission, was a soldier in the US Army during the Korean Conflict, and graduated from USU. He loved people and was a natural born teacher, who loved his students. He married his wife of 50 years, Trudy Ann Miller, June 3, 1960 in the Logan LDS Temple. He was a High Priest in the Church of Jesus Christ of Latter-day Saints and served in many callings, including as a Bishop in Reno, NV and at USU, in Logan. He and Trudy enjoyed officiating in the Logan Temple and as mission tour guides at the Paris ID Tabernacle. Don was a dedicated home teacher. Don's greatest love was playing with family and he spent his life making wonderful memories with them. He created beautiful waterfalls everywhere he lived. Surviving are his wife Trudy, children Karie Kim Cooper, Lindon, UT; Craig Andrea, Logan, UT; Dave Barbara, Farmington, UT; 11 grandchildren, and his sister Klea Fae Wright. He was preceded in death by his parents, infant son Gary, and his sister Deanna Arbon. Funeral Services will be held Wednesday, December 1, 2010 at 11:00 a.m. at Rogers and Taylor Funeral Home Chapel, 111 North 100 East, Tremonton, UT. Friends may call Tuesday, November 30, 2010 from 6:00- 8:00 p.m. and Wednesday from 9:30-10:40 a.m. at the funeral home prior to the services. Interment will follow at the Tremonton Riverview Cemetery where military honors will be accorded.

The family of Don LaMar Garfield created this Life Tributes page to make it easy to share your memories.

Send flowers to the Garfield family.