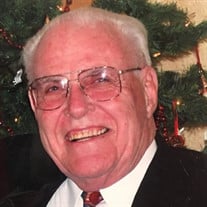 Our father, Donald Keith Winter, passed away on Monday, February 11, 2019 surrounded by his loving family. Dad was born October 17, 1930 in Independence, Missouri. He married Carolyn Elizabeth Bailey on August 4, 1950 in Missouri and they were sealed in the Salt Lake Temple on April 4, 1951. Dad enlisted in the Army shortly after he and Mom were married. While serving in the Army in the Vietnam War in March 1969, Dad was shot and wounded. He medically retired from the Army at the rank of First Sergeant and he and Mom moved the family to Utah. In 1969, Dad and Mom settled in Cache Valley with their eight children. They had their 9th child while both Dad and Mom were finishing college at Utah State University. To support his large family, Dad dropped out of his Master's program in Education to work as a newspaper man. Dad became the circulation manager for the Deseret News and Salt Lake Tribune in Cache Valley and many times with the help of his family delivered newspapers for several years. His children fondly remember sometimes reading 5 different newspapers, as Dad subscribed to the Herald Journal and also managed circulation for the Wall Street Journal and USA Today for several years. Dad also worked as a real estate agent, apprentice appraiser, and dabbled in real estate investment to support his family. Dad loved to fish, bowl, and golf and was a regular at the Birch Creek golf course in Smithfield until his health kept him off the golf course. During his golf career Dad made two holes-in-one. Dad was well-known for his cooking and would cook biscuits and gravy and fried chicken and mashed potatoes at the request of his family. Dad served as the head of the local Disabled American Veterans chapter for many years. His children remember summer barbecues and Christmas dinners with the members of the DAV and their families, several at which he served his famous chili. Dad and Mom moved their family from Logan to Providence in 1976, where they lived for nearly 30 years. In 1998-99, and again in 2000-01, Dad and Mom served lifestyle missions for the Church of Jesus Christ of Latter-Day Saints teaching at universities in China and had a great time serving the people of China. He and Mom served as temple workers and Dad continued to serve as a temple worker even after Mom's death. The church was important to Dad; when he couldn't drive his car anymore, he would drive his riding lawn mower or side-by-side to church. In 2003, Dad and Mom moved to Richmond, Utah. He lost Carolyn, his beloved wife of nearly 57 years, in March 2007 from pancreatic cancer. Dad will be remembered by many in Richmond for driving his side-by-side all over, including to the Maverik gas station and along the side of the highway to Smithfield, Franklin, and Lewiston. If he couldn't drive his side-byside to Maverik to get his root beer, he drove his riding lawn mower. Dad is survived by eight children, 35 grandchildren, 46 great-grandchildren with at least two on the way, 1 great, great-grandchild and another great, great on the way. His surviving children include Steven Winter, Deborah (Randy) Steadman, Jeffrey (Lisa) Winter, Katherine (Scott) Williams, Paul (Joyce) Winter, Joel (Wendee) Winter, Elizabeth (Allen) Livingston, and John (Kim) Winter. Dad was preceded in death by his wife, Carolyn, a son, Gregory, and two grandchildren, Brent Hawkins and Hannah Chesley. Many thanks to the staff at Cache Valley Assisted Living for their care and concern for dad while he was there. Funeral services will be held Friday, February 22nd at 11 am in the City Creek Ward (150 S 100 E) in Richmond. Friends may call Thursday from 6-8 pm at Nelson Funeral Home (162 E 400 N Logan) & at the chapel on Friday from 9:30-10:30 am. Interment will follow the funeral at Richmond City Cemetery. Condolences & memories may be shared online at www.nelsonfuneralhome.com

Our father, Donald Keith Winter, passed away on Monday, February 11, 2019 surrounded by his loving family. Dad was born October 17, 1930 in Independence, Missouri. He married Carolyn Elizabeth Bailey on August 4, 1950 in Missouri and they were... View Obituary & Service Information

The family of Donald Keith Winter created this Life Tributes page to make it easy to share your memories.

Our father, Donald Keith Winter, passed away on Monday, February...

Send flowers to the Winter family.