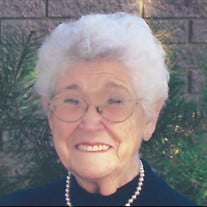 Doris Anita Hyde was born on April 27, 1933 to Josephine Fowler Hyde and Philip Augustus Hyde in Buhl, Twin Falls, Idaho. She returned home to our Heavenly Father on December 21, 2019. Doris spent most of her childhood in the Portland, Oregon area. When she was 16 years old she moved to Rupert, Idaho to live with her oldest sister. She finished high school in Rupert and worked at Kings Variety Store. When she was 18 years old she met a handsome young man at a church stake dance. She married Herbert Meral Yost in Elko, Nevada on May 23, 1952. Meral worked on a sheep ranch in Muldoon, Idaho and they lived there until after their first daughter, Barbara, was born. They then moved to Kellogg, Idaho and subsequently to Pinehurst, Idaho. While living in the Kellogg area they were joined by 3 more children, Herbert , David, and Laura. After deciding to leave Pinehurst, Idaho, Doris and Meral moved to California . In California they were joined by another daughter, Anna. They moved to Salt Lake City, Utah in 1967. While living in Salt Lake City, they joined the Church of Jesus Christ of Latter Day Saints. They lived in Salt Lake City for a number of years and then moved to Malta, Idaho for work. Meral suffered a stroke while living in Malta and four years later in September of 1986 he passed away. Doris faithfully took care of Meral during that whole time and was a great strength and most wonderful caretaker for him. After Meral passed away she found employment at different places in Cache Valley. She retired and lived on her own until her death. Meral and Doris were sealed in the Logan Temple in November 1990. Doris is survived by Barbara Ann Yost Tidwell (Gary), Herbert Reed Yost (Wendy) and Laura Louise Yost Johnson, and Cathie Yost (daughter-in-law). Doris was preceded in death by her husband, Meral , David Michael Yost (son) and Anna Lea Yost Burton (daughter) and Ronald Burton-(son-in-law). Doris is survived by 13 grandchildren and 34 great grandchildren. Funeral services will be held Friday, December 27, 2019 at 12 noon at Nelson Funeral Home, 162 East 400 North, Logan. Friends may call Friday from 10:30 to 11:30 a.m. Interment will be in the Smithfield City Cemetery. Condolences may be sent to the family online at www.nelsonfuneralhome.com.

Doris Anita Hyde was born on April 27, 1933 to Josephine Fowler Hyde and Philip Augustus Hyde in Buhl, Twin Falls, Idaho. She returned home to our Heavenly Father on December 21, 2019. Doris spent most of her childhood in the Portland, Oregon... View Obituary & Service Information

The family of Doris Anita Hyde Yost created this Life Tributes page to make it easy to share your memories.

Send flowers to the Yost family.