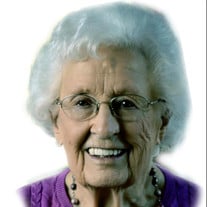 Dorothy Rae Tuttle Griffiths passed away quietly during the night of March 18, 2020 as the rain fell, surrounded by her three daughters. She was 102 years old. Dorothy Rae Tuttle Griffiths was born on January 25, 1918 in Smithfield, Utah to Rachel Louisa Hale and Edward Ray Tuttle. Dorothy was the third of 8 children in her family. Her siblings were Elmo (who died at age 6), Jean, Helen, Miriam, Rosemary, Edward (Tedd), and Gary. Growing up, Dorothy’s family moved many times. She lived in 27 homes in 9 different towns in Utah, Idaho, and Kentucky before graduating from Logan High School. She first met Nathan Benjamin Griffiths when she was 16 years old. Nate told “Dot” (as he affectionately called her) that he would marry her when she grew up. She married him on September 8, 1936 in the Salt Lake Temple at the age of 18 1/2. They settled in his family home in Smithfield, Utah, where they lived the rest of their lives. They were blessed with six children: Faye, Scott, Karen, Lyn, Mark and Kathleen. In addition, they fostered Marthella Peter, an Indian Placement daughter, for 8 years. Their hearts were broken when they said an early goodbye to little Scott (age 2) and Karen (age 4) because of the then unknown disease, Cystic Fibrosis. Mark, born prematurely in 1957, lived just 22 hours. Dorothy's testimony of the Gospel of Jesus Christ was strengthened in these losses, and she has lived her life so that her beloved family can be reunited and share eternal life. Nate’s work with LeGrand Johnson Construction took the young family to various places in Idaho, Utah, and Nevada. Nate and Dot lived in a trailer home at the work sites so their family could be together. Full of life and love that exceeded her 5’2” frame, Dorothy used her talents to bless others: sewing clothes, making prom dresses and costumes, quilting, interior decorating, cooking, building, and gardening. Her children always had the best Halloween costumes and the most creative Valentine boxes. Dorothy’s home was always the gathering place for many family traditions: Santa Christmas Party, Christmas Family shopping, Thanksgiving, Memorial Day Breakfast, Easter Egg Rolling on USU hill, and the monthly Birthday party. These times knit the family together in love. Dorothy was especially good at LOVING. Her great-granddaughter, Mindy, recently wrote, “A few months ago, I told Grandma how amazed I am of her ability to make each of us feel like we’re her favorite and, with the most beautiful smile, she said, “You all are!” So if Dorothy Griffiths ever made you feel like you were her favorite it’s because you are!” Living during the Depression, she learned about hard work and frugal living. Yet she shared everything. As a member of the Church of Jesus Christ of Latter-Day Saints, she served in all organizations; as Relief Society & Primary president, counselor, teacher, Young Women’s advisor in her 70’s, and compassionate service leader in her 90’s. Dorothy and Nate served a full-time mission to the Alabama Birmingham Mission in 1981-1982. When they returned home, they served as ordinance workers in the Logan Temple for many years. Ministering was her way of life. On the morning of her 100th birthday party, despite her poor eyesight and her inability to stand without assistance, she was at home, hurriedly baking homemade bread and a lemon pie for an injured neighbor before going to her party. Dorothy’s testimony of Jesus Christ and of His Church is deep and abiding. Her example of dedication, determination and devotion will be felt eternally and will be a guiding force for her posterity. Her faith could move mountains and many of us were the recipients of her true and honest prayers in our behalf. Dorothy is survived by her three daughters: Faye (Loyal) Andersen, Lyn (Dale) Swan, Kathleen Griffiths, 16 grandchildren, 70 great-grandchildren, 27 great-great grandchildren, and 34 sons and daughters-in-law. She is preceded in death by her parents and siblings, husband Nathan (1912-1996), three children: Nathan Scott (1938-1940), Karen (1940-1944) and William Mark (1957), and great-grandson, Brendan Peck (2004-2016). The family would like to thank Kathleen Griffiths for her care, companionship and compassionate service to Mother for the past six years. A private family viewing will be held Tuesday, March 24 from 6-8 p.m. Funeral services will be broadcast Wednesday, March 25 at 1:00 pm. Burial will follow at the Smithfield Cemetery.

The family of Dorothy Rae Tuttle Griffiths created this Life Tributes page to make it easy to share your memories.

Dorothy Rae Tuttle Griffiths passed away quietly during the night...

Send flowers to the Griffiths family.