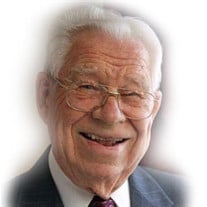 Edgar Keith Scott August 13, 1923 - December 17, 2016 Our dear father, Edgar Keith Scott, passed away peacefully, surrounded by his family on Saturday, December 17, 2016. He was 93 years old. Keith was born August 13, 1923 in Gannett, Idaho to John Edgar Scott and Regina Anderson Scott. He was the sixth of seven children. Keith was raised on the family farm in Idaho. He attended Hailey High School where he participated in band and basketball and he was the senior class president. After graduation, Keith enlisted in the US Navy. He was stationed in the San Francisco bay area. During a short furlough, Keith returned to Hailey to marry Marjorie Jensen, his high school sweetheart. They were later sealed on August 26, 1960, in the Los Angeles Temple of the LDS Church. Keith served in the Navy during World War II and was assigned to the Naval Medical Research Unit No.1 which was located at the University of California in Berkeley, California. He was in charge of a laboratory essential for national security. When the war ended he was continuously employed by the University of California in a similar capacity as a laboratory technician and supervisor. Keith held this position for forty years before retiring in 1986. Keith was called up again for active service in the Navy during the Korean Conflict. During their years in California, Keith and Marjorie lived in Berkeley, Oakland, San Leandro and Castro Valley. They raised their three children there. Keith was an active member of the Church of Jesus Christ of Latter-day Saints. He faithfully served in scouting, as a Bishop’s counselor and he also served in the Logan Temple. Keith enjoyed travel, photography, and music in addition to serving his family. After his retirement, Keith and Marjorie moved to Smithfield, Utah where they enjoyed their many friends and neighbors in the Spring Meadow community. Keith spent his final days at Terrace Grove Assisted Living. Special thanks go to the many nurses, CNAs and other aides, administrators and Rocky Mountain Hospice who took such loving care of him while he lived there. Keith is survived by his three children: Linda Scott Bacher of North Logan, Utah, Dennis Scott (Jeanette) Utah, and Susan Scott Benton of Logan, Utah. He is also survived by one sister, Carolyn Davis of Walnut Creek, California, many grandchildren, great-grandchildren and one great-great-granddaughter. He was preceded in death by his wife Marjorie, his parents, three brothers and two sisters. Keith was loved by all who knew him. He had a kind and loving nature that drew everyone he met to him. He will be greatly missed by his family, but we know he will never be far from us. Funeral services will be held at noon on Wednesday, December 28, 2016 at the Nelson Funeral Home 162 E 400 N in Logan, Utah. Viewing will begin at 10:30 a.m. Interment to be held with military honors in the Smithfield Cemetery. Condolences and memories may be shared with the family online at www.nelsonfuneralhome.com

The family of Edgar Keith Scott created this Life Tributes page to make it easy to share your memories.

Send flowers to the Scott family.