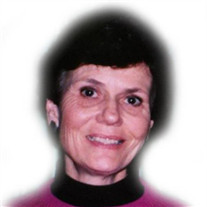 Edna Carol Weeks Leavitt, of Smithfield, Utah was born September 28th, 1932, the sixth child of Asa and Lillie Weeks. Carol was the beloved wife of Melvin Gaylord Leavitt of Lewiston, Utah for 64 years. They raised their family in San Jose, California, where Gaylord was a dentist. Carol passed away February 20, 2015 in San Diego, California. She is survived by her brother David Weeks of Logan, Utah; sister Marjorie Scholes of Smithfield, Utah; her husband Gaylord and their four children; KaraLyn Leavitt (Lynn Drake), Kent Gaylord Leavitt(Janalee), Terri Jo Leavitt (Randy Calvert), and Eric Bryan Leavitt (Louise), seventeen grandchildren and thirty three great-grandchildren. Her grandchildren and great-grandchildren know she adored them. She especially loved to hold the babies. Carol's work and glory was always her family. She supported anything her children were doing and spent her life serving them and others. She was always involved in PTA, the Dental Auxiliary and was active in the political causes she felt were morally correct. She served faithfully in The Church of Jesus Christ of Latter-day Saints, helping build the Kingdom of God in any way when she was asked. Carol loved music and shared her talents in the church and community choirs. She organized a special community Bicentennial music festival in 1976. She was often a Ward and Stake choir director. She excelled as a teacher and taught her family to give nothing less than your best when serving the Lord. She traveled near and far with her husband doing things which were way out of her comfort zone. She followed him skiing, on safari and various expeditions to fishing and hunting lodges. She was always a good sport (and a good skier.) Viewing will be at Nelson Funeral Home, 85 South Main, Smithfield, Utah on Friday, March 13th from 6 to 8pm. The funeral services will be Saturday, March 14 at the Cove Ward Building, 12832 North 1200 East, Cove, Utah at 11:00am with a short viewing from 10:00 to 10:30am. Condolences may be sent to the family online at www.nelsonfuneralhome.com.

The family of Edna Carol Weeks Leavitt created this Life Tributes page to make it easy to share your memories.

Send flowers to the Leavitt family.