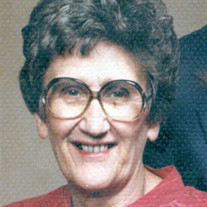 Edna Griffin Thompson passed away on March 19, 2016 at Intermountain Medical Center in Salt Lake City. She was born March 17, 1923 in Clarkson, Utah to Raymond Maughan and Mayme Heggie Griffin. She spent her formative years in Clarkston, surrounded by the love of a large extended family. She attended school in Clarkston, grades 1-8 and graduated from North Cache High School. She worked in Logan and Ogden after high school, before marrying her life long sweetheart, Rex K. Thompson on October 12, 1943 in the Logan Temple. Shortly after their marriage, Rex joined the Marine Corps, and spent the next two and a half years in the Pacific theater of World War II. His survival during the battle of Iwo Jima, and his return from war was a pivotal moment in Edna's life. The blessing of that return, and the gratitude she felt for the opportunity to spend her life with him was always with her. Rex and Edna spent their married life in Logan. She was a devoted member of the Church of Jesus Christ of Latter-day-Saints. Her testimony was strong. She had great faith, and exemplified true discipleship. She served throughout her life in the church and community. She loved the auxiliaries of the church, working in many ward and stake callings. She volunteered at the Logan Hospital, as an election judge, and with Rex, delivered Meals on Wheels until they were almost 90. She worked at Beehive Clothing and enjoyed serving the patrons, and working with many friends. She and Rex accepted a call for a mission to New Zealand after their retirement. She loved New Zealand, the people, culture, and the beauty of the land. Together, Rex and Edna spent 10 fulling years officiating in the Logan Temple. She was a member of the Logan 9th Ward for over 68 years. She cherished her neighbors and ward members. She was always willing to lend a hand, carry a burden, be a friend. Many are gone, but not forgotten. Her family was precious to her. She served them with joy. Her handcrafted items, baby blankets, quilts, afghans, as well as her homemade bread, fruit leather, peaches and jam were always welcomed gifts. She and Rex have five children. Kaye T. Hansen, Salt Lake City, Ruth T. Palmer, (Larry) West Valley City, Beth T. Roberts, South Jordan, Scott G. Thompson, Bountiful, and Karen T. Carlson, (Morgan) North Logan. Her Twenty-five grandchildren, 67 great grandchildren and 2 great great grandchildren were beloved. She thought they were all unique, smart, kind and "never gave her a minute's trouble." She treasured her relationship with her siblings, in-laws, aunts and uncles, cousins, nieces and nephews They were not only her family, they were her friends. She is survived by her husband of 72 years Rex, and her children and grandchildren. Also surviving are her sisters, June Griffin Soelberg, Menlo Park California, Annie Griffin Andretta (Lino) Doris California, Lorna Griffin Dahle, Logan, her brother Clair H. Griffin (Marilyn) Logan, and sister-in-law Mary F. Griffin, Providence. Surviving brothers and sisters-in-law are Joe Thompson, Smithfield, Melvin Thompson (Lila) Logan, Electa Thompson Nelson, Salt Lake City and Sylvia Thompson Hansen, Lewiston. She was preceded in death by her parents, elder brother Earl H. Griffin, sister-in-law Faye Thompson Godfrey and son-in-law Brent W. Roberts. Funeral services will be held at 12:00 noon on Thursday, March 24, 2016 at the Logan 9th ward chapel, 125 E. 500 N. under the direction of Bishop Todd Strickland. Visitation and viewing with be at the Nelson Funeral Home 162 E. 400 N. from 6:00-8:00 pm on Wednesday evening March 23rd and from 10:30 until 11:30 am prior to the funeral services on the 24th. Internment will be in the Clarkston City Cemetery.

The family of Edna Griffin Thompson created this Life Tributes page to make it easy to share your memories.

Edna Griffin Thompson passed away on March 19, 2016 at Intermountain...

Send flowers to the Thompson family.