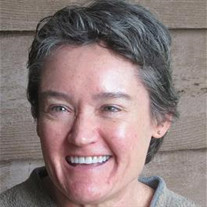 Elizabeth (Liz) Afton Carlisle, a longtime resident of Logan, Utah, passed away on Monday, November 2, 2015, at her home. The cause of her death was reported to be Small Bowel Volvulus. Elizabeth was born on October 11, 1957 to John Willard Carlisle and Nancy Norton Carlisle in Minneapolis, Minnesota. During her childhood Elizabeth’s family lived in Minnesota for two years, then moved to Ft. Belvoir, Virginia, before moving to Logan, Utah which was to become Elizabeth’s home for most of her life. In Logan she attended the Edith Bowen Elementary School and the Logan Junior and Senior High Schools. Later she studied at Utah State University and graduated with a bachelor’s degree in psychology, with minors in both chemistry and biology. She was a gifted violinist and an excellent student. Elizabeth was a loving mother to her children Ian, Antonia, and Maria, from her marriage to Jeff Keller. She was a very sensitive and kind person. She was cheerful and optimistic, despite the many health problems that came her way. She was extremely strong. Highly intelligent, Elizabeth greatly enjoyed books, music, cooking, and gardening. The many highlights of her life include traveling with the singer Carole King and spending an evening in the apartment of Yoko Ono and John Lennon in New York. She always sought to deepen her relationship with God. She was a member of the Church of Jesus Christ of Latter-day Saints and part of the community at the First Presbyterian Church of Logan. She is survived by her three children, Ian, Antonia, and Maria Keller; her mother Nancy; her sisters and brothers-in-law Catherine and August, Ann and Gregory, Emily and David; her brothers and sisters-in-law, Jack and Mary, Ed and Mara. She was preceded in death by her father, John W., and her grandparents, John C. and Afton Carlisle and E. Virgil and Phyllis Norton. Her family would like to express sincere appreciation to so many who have been involved in her life, including Dr. Allen Anderson, Dr. Edward Redd, and Dr. Roueida Ghadban, who gave her such excellent professional care. A special thanks to Bishop Mike Child and Mike Nelson, her home teachers, who were of service to her for many years. Elizabeth was very grateful to her coworkers and supervisors at Bear River House, particularly her recovery specialist, Kevin Winn. She had a very wide circle of friends, neighbors, and church members. She was loved by countless individuals, all of whom will miss her greatly. There will be a funeral service honoring Elizabeth at 12:00 p.m. on Monday, November 9, 2015 at Nelson Funeral Home, 162 East 400 North in Logan, Utah. There will be viewings on Sunday, November 8, from 6:00 to 8:00 p.m.; and from 10:30 to 11:30 a.m. on the day of the service at the same location. Interment will be in the Logan City Cemetery. Condolences may be sent to the family online at www.nelsonfuneralhome.com.

Elizabeth (Liz) Afton Carlisle, a longtime resident of Logan, Utah, passed away on Monday, November 2, 2015, at her home. The cause of her death was reported to be Small Bowel Volvulus. Elizabeth was born on October 11, 1957 to John Willard... View Obituary & Service Information

The family of Elizabeth Afton Carlisle created this Life Tributes page to make it easy to share your memories.

Send flowers to the Carlisle family.