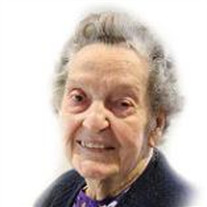 Esther Hillegass, born May 22, 1930, in New Brunswick, NJ, died peacefully at home on March 26th after a short illness. She was 86. Esther Hyacinth Wines, was born at home, 145 Troop Avenue in New Brunswick, NJ, at 5:05 PM, and was an identical twin. The birth was attended by a doctor summoned on foot, more than a mile from the house. Her sister, Effie Mariah Wines, born one-hour earlier, was her closest life-long friend and pre-deceased her on December 6, 2012. Esther was the fourth child of Gertrude Valentina Conger Wines, of New Brunswick, NJ, and George William Melvin Wines, Sr., of Long Island, NY. In addition to her twin sister, she had one older sister Gertrude Melvina Wines, born 1927, and two brothers, George Melvin Wines Jr., an older brother, born 1929-2003, and Robert Charles Mitchell Wines, Sr., a younger brother, born 1944. Esther, a lifelong Christian, was Christened at age 2 and became a baptized member of the First Baptist Church on Livingston Avenue and Hale Street, New Brunswick, NJ, in 1943. Dr. Bruce Gilman baptized her into the body of Christ. As a young church member she attended church 4 to 5 days a week, sang in the choir, and participated in the missions and youth groups. She attended New Brunswick High School, but left school in 1948 to care for her Aunt Mildred Ayers of Brooklyn, OH. She returned to high school to complete her diploma requirements and is considered a member of the graduating class of 1949. She joined the Order of the Eastern Star New Brunswick Allah Chapter #211 in 1950, and remained a lifelong member. She received her 50-year pin in 2000. The Allah Chapter became the Ruth Chapter #12 of Milltown, NJ. After graduation she worked for Squibbs Laboratories in New Brunswick, NJ, performing radiation research. Throughout her life, it was her desire to become a nurse and a missionary to China. She never fulfilled these desires, except through prayer and devotion. Esther would not let anyone hold her back. For example, she was the first woman in her family to learn how to drive. She purchased her first car from her father for $300. He never fulfilled his agreement to teach her to drive, so she took a vacation from work, hired a driving-school instructor and learned. In 1952 she married Arthur Charles Hillegass, Jr., of Buenos Aires, Argentina, and supported him in his ministry work at the New Brunswick Theological Seminary and later at Harvard University. The family was called to churches in many different locations. They lived through the race riots in New Orleans, LA, and bravely seated blacks when others would not. They were tormented by cross burnings on their front lawn and disturbing telephone calls, but knew that they were doing God’s work. Eventually, they were called to a church in Colorado Springs, CO. Esther and Art were married 30 years before his death in 1981. They had four children: Helen Gertrude Hillegass, born 1955; Cherlyn Esther Hillegass Kirk, born 1956; Arthur Charles Hillegass, III, born 1958-2012; and Melinda Anne Hillegass, born 1969. In 1977, following the illness of her husband, the family moved to Iola, KN, and joined St. Timothy’s Episcopal Church. While a member there she belonged to the Altar Guild and the Vestry. During this time she worked for Berg Manufacturing where she assembled parts for semi-tractor trailer truck brakes. During her years at Berg she made many life-long friends who never stopped teasing her about always wearing dresses to work. She retired from Berg in 1994. In 2001, she moved to Logan, UT, and joined St. John’s Episcopal Church where she served on the Vestry, and enjoyed the company of family, church family, and grandchildren. She loved worship. Soon after retirement she traveled to Buenos Aires, Argentina to see where her husband had been raised. In May 2000 she celebrated her 70th birthday with her twin sister and other family members in Duck, NC. And, in June 2004, she fulfilled a lifelong dream and traveled to Alaska by cruise ship with her daughter Helen; a trip she never forgot. She lived in Logan until her death, where she was cared for by her devoted daughter Melinda. She is survived by: Helen Hillegass of Baltimore, MD; Cherlyn and Gerald Kirk of Baltimore, MD; Melinda Anne Hillegass and James Eric Israelsen of Hyde Park, UT; one granddaughter, Danielle Esther Israelsen; three grandsons Arthur Charles Hillegass, IV, Henry Hillegass, and Andrew Christian Israelsen; her brother Robert and her sister Gertrude; and many nieces and nephews. She spoke almost daily with her nephew, Gary Yetman, who kept her spirits up and her prayers flowing. Her passing was peaceful. Funeral services will be held at St. John’s Episcopal Church, 85 E 100 N, Logan, UT on Sunday, April 2 at 5:00 PM. A viewing will be held from 4:00 to 5:00 PM. Interment will take place at a future date at the City of Hudson Cemetery in Hudson, NY. Condolences & memories may be shared online at www.nelsonfuneralhome.com.

The family of Esther Wines Hillegass created this Life Tributes page to make it easy to share your memories.

Send flowers to the Hillegass family.