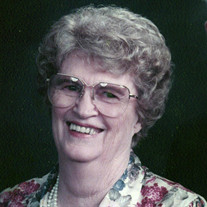 Evelyn B. Hansen, 90, passed away Monday, Feb. 9, 2015 in Logan, UT. She was born on Sept. 19, 1924 in Montpelier, ID the eight child of Frank Wilbur and Grace Smart Bacon. She lived in Georgetown, ID until she graduated from HS. Most of her remaining years were spent in Logan, where she met and married LaVon G. Hansen. They were married on July 29, 1946 in the Logan LDS Temple and became the parents of five children. When WWII hit, Evelyn worked at Hill AFB. After moving to Logan she worked at Smith’s Food King, USU bookstore and Tots to Teens. Evelyn was always active in the LDS Church and had a strong testimony her entire life. She served in many capacities including RS Pres. and as a teacher. She and LaVon served a mission to the Mesa Arizona Temple Visitors Center and served for many years as officiators in the Logan Temple. Evelyn was a very good cook and her potato salad and Lemon Meringue pie were always requested by those who knew her. She loved to sing and sang with the Towne Singers for many years. Oil painting became one of her passions later in life until Macular Degeneration took her eyesight. She loved writing and had an amazing memory, especially for telephone numbers. Evelyn was preceded in death by her son, Kendell, both her parents and five sisters, Janice Solum, Bernice Bartchie, Lucille Hill, Nina Stuart and Edith Bacon. She is survived by her husband of 68 years, LaVon, and their children LynnAnne Hansen, RonaLee (Steve) Hymas, Terry Hansen, Jolene Diaz, their daughter-in-law, Catherine (Kendell-deceased) Hansen, 13 grandchildren and 12 great grandchildren, a brother, Dave Bacon and a sister, Verna Sparks. Funeral services will be Sat, Feb. 14, at 11:00 at the Logan 16th Ward church, 125 West 600 North. Viewings will be held at Nelson Funeral Home, 162 East 400 North, Logan, UT on Fri, Feb. 13 from 6-8 p.m. and at the church on Sat, Feb. 14 from 9:30 to 10:30 prior to the funeral. Burial will follow the funeral at the Logan City Cemetery. The family would like to thank the staff at Sunshine Terrace and especially the Sunshine Home Health and Hospice for their service and kindness, and to the members of the 16th Ward for their help and support. Condolences & memories may be shared online at www.nelsonfuneralhome.com

Evelyn B. Hansen, 90, passed away Monday, Feb. 9, 2015 in Logan, UT. She was born on Sept. 19, 1924 in Montpelier, ID the eight child of Frank Wilbur and Grace Smart Bacon. She lived in Georgetown, ID until she graduated from HS. Most of... View Obituary & Service Information

The family of Evelyn Bacon Hansen created this Life Tributes page to make it easy to share your memories.