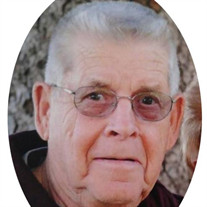 Farrell Lester Karren 83, passed away May 22, 2016 after a lengthy battle with pancreatic cancer, at his home in Smithfield surrounded by his family. He was born June 19, 1932 in Lewiston Utah where he worked with his father and brother on the family farm. He was the son of Clawson Langley and Alta Layne Karren. He graduated from North Cache in 1950 where he excelled in both baseball and football. He met the love of his life, Janet Pitcher while attending high School. They were married January 17, 1951 in the Logan LDS temple. They enjoyed 65 wonderful years together, teaching us by example showing love, compassion and service to everyone. He worked several jobs during his lifetime, driving truck for Cache Valley Dairy, Smithfield City Police force, and he retired from Mountain Fuel after working with them for 28 years. His favorite past time was playing baseball with the Smithfield baseball team along with other teams throughout his life, where he met and enjoyed many lifelong friends. He stayed an avid baseball fan his entire life. He and his wife Janet supported his kids along with many grandkids in their passions, talents, or hobbies whatever their interests would be. His kids and grandkids loved having their support, encouragement and cheers from the sidelines. He is survived by his wife Janet, children Nancy (Vic) Bingham, Cindy (Fred) Porter, Brenda Karren and Brent (Jodi) Karren. Together they have 10 grandchildren, twenty seven great grandchildren and one great-great grandson. He was preceded in death by his parents and one brother Garth Karren, brother-in-law Bruce Pitcher. Special thanks to Access Home care and hospice, Devin and Bonnie for their loving compassion care. Also we want to thank Julie and Mitzi from the Cache Valley Cancer Center. A viewing will be held at Smithfield South Stake Center, 451 South 250 East, Smithfield, Utah Wednesday May 25 from 6:00 to 8:00 P.M. Funeral Services will be held Thursday, May 26 at 11:00 A.M. a viewing will be held prior to the service from 9:30 to 10:30 a.m. Interment will be in the Smithfield City Cemetery. Condolences may be sent to the family online at www.nelsonfuneralhome.com.

Farrell Lester Karren 83, passed away May 22, 2016 after a lengthy battle with pancreatic cancer, at his home in Smithfield surrounded by his family. He was born June 19, 1932 in Lewiston Utah where he worked with his father and brother on... View Obituary & Service Information

The family of Farrell Lester Karren created this Life Tributes page to make it easy to share your memories.

Send flowers to the Karren family.