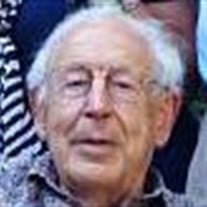 Fay Fuhriman Jones passed from mortality on Monday, December 28th, at his long time home in Menlo Park (Sharon Heights), safe and secure in the arms of his beloved daughter Cynthia. Born July 19, 1925 in Lewiston, Utah, Fay was the youngest of the six boys, of Le Roy Jones and Minerva Bertha Fuhriman, in their house on Sugar Factory Row, where his father worked. When his dad became a foreman they moved to their farm house. Fay walked a mile every day to catch the electric train from Lewiston so he could attend North Cache High School in Richmond, Utah, just a few miles south of the Idaho border, and then made that same mile walk each night back to his house. At North Cache High, Fay became a sports star in both football and track, and in 1943, when he was a senior in high school, he was undefeated in track in the 100 and 220 yard sprints, and had the fastest times in the state of Utah in both events. At the completion of High School, Fay told his Mother he was going to Logan to sign-up for his college classes at Utah State, but instead, he signed up for the Air Force, which then enabled him to start to attend college at USU before being called into his training group. Fay finished at the top of his group, which enabled him to pick what area of Air Force service he entered. He chose being radio-operator and waist gunner on B-17’s, and was promoted quickly to the rank of Sergeant. As his training was nearing completion Fay used his accumulated leave go to Utah to take a long weekend off, a decision which would change the course of his life forever. In Utah, one of Dad’s friends was registered as “4F”, and was at him because he was not eligible to fight, set Dad up on a blind date with a beautiful Utah State music major, “The Voice of Utah”, Georgene Doutre from Logan, Utah. After that weekend, Fay was “hooked”, and he and Georgene wrote to each other as he went through training and was shipped overseas to England as part of the 8th Army Air Corps. Fay flew 19 combat missions over Europe and Germany, and also flew additional humanitarian missions, including dropping food to the starving people of Holland, which gave him his best memories of the war. When the war ended, Fay had another life-changing experience, since he, and part of his squadron were chosen to fly into Poland and France to bring back surviving POW’s who had been kept in NAZI concentration camps. Fay never forgot the tender interchange with those rescued skeletal prisoners, and he was actually featured in Ham Parks column in the Salt Lake Tribune, noted as an Ambassador of Good Will, who spoke more fluent French (with one kind word), than all the diplomats by his service in the war. Fay was discharged from the Air Force as a first lieutenant and re-enrolled back to Utah State University as a student and simultaneously joined their college track team. Just as in his senior year of High School, Fay never lost in any college competition, and Utah State track team won the conference championship in 1948, with Fay being “the fastest man in Utah”, and honored as All-American. While attending USU, Fay started a student laundry service, making it the most successful on campus by picking up clothes from all the fraternities on Wednesdays and delivered the laundry and dry-cleaning by Friday evening or Saturday morning. Georgene became Fay’s fiancé and while he was getting his Stanford MBA in Palo Alto, she was pursuing her opera career, first attending Julliard in NYC, and then singing at the “Met”, but with Fay graduating top of his class from Stanford, Georgene to put her career behind her in order to join him in marriage for time and all eternity in the Logan Utah Temple on June 21, 1950, and they started their lives together in Palo Alto, California. Dad started his executive career with Macy’s and at the same time joined the service organization of Rotary (he was a 50+ year Rotarian). In his retail career Fay became the General Manager of Macy’s Stanford, and the President of Stanford Shopping Center, guiding it to being one of the premiere shopping centers in the United States. Fay was later was recruited by Merv Morris to be an Executive for Mervyn’s and GM of their Cupertino store, where he once again became President of the Shopping Center and was elected President of the Cupertino Chamber of Commerce. Fay then changed careers completely, using his education and entrepreneurial skills to start his own financial advisory business, which he pursued with great success, both for his clients and himself. He finally retired at the young age of 86, still having over 150 active clients. Throughout his life Fay was active in his faith and service for The Church of Jesus Christ of Latter-day Saints, willingly accepting all requests and callings. For many years, and up until the last few months of his life, Fay was also the greeter for all those who came into the Valparaiso Chapel in Menlo Park on Sundays, making sure they had a firm handshake, a warm smile, and a kind word. Fay is now once again with his college sweetheart, as well as many other loved ones. In life he is survived by his four children and their spouses; Richard Doutre Jones (wife Shelli Green), Cynthia Jones Callaghan (Husband John) , Stanton Doutre Jones (wife Nancy Harris) and Marshall Doutre Jones (wife Cindy Brown) and 14 grandchildren and 9 great-grandchildren.

The family of Fay Fuhriman Jones created this Life Tributes page to make it easy to share your memories.