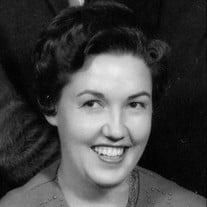 Fay Henrie Keller 1932-2019 Fay Henrie Keller, nearly 87, formerly of River Heights, Utah left this earth Wednesday, 10 April 2019 to be reunited with her eternal companion, Reg and loved ones. She entered this life on a very snowy April day. Fay was born the seventh of nine children to George Byron and Arvella Olsen Henrie on 30 April 1932 in Tremonton, Utah. She was the first of her siblings to be born in a hospital. The family lived in Juniper Idaho when Fay was born, then moved to Snowville, Utah when she was five years old, then to Logan, Utah when she was nine. She spent the rest of her youth in the Logan 7th LDS Ward and graduated from Logan High School. She met her husband, Reginald Keller, through her brother Argyle. While Reg and Argyle were stationed in Fort Lewis, Washington together for ROTC Summer Camp in 1950, Reg continued courting Argyle’s youngest sister through letters. These letters from Dad to Mom are a treasure. On 9 November 1950, Reg and Fay were married in the Logan LDS Temple. The family moved in 1955 from Logan to River Heights, Utah. Fay and Reg raised their family there. Fay was a devoted, loving mother, readily available offering encouragement, praise, empathy and support. Reg worked as a letter carrier to provide for his family. When her youngest child started first grade, Fay was asked to help with the River Heights Elementary School lunch. She worked as a cook there until all of her children completed elementary school. She was also employed at Wurlitzers, USU Records Office and the Logan Temple, retiring from the Church of Jesus Christ of Latter-day Saints. Prior to becoming a full time employee, Fay was a volunteer typist for the Logan Temple for many years. Fay and Reg had a lifelong love of music. Home was filled with records playing of classical music, Glenn Miller, Nat King Cole, Doris Day to Eddie Arnold. Their love of music was passed onto their children. Fay sang in her high school musicals, also performing solos and duets on other occasions, including singing solos such as, “Because”, at her brothers, Ivan’s and Dar’s weddings. She enjoyed singing and directing many ward choirs, the “Singing Mothers”, and serving as a ward chorister. Fay and Reg loved their family, friends and neighbors very much, hosting many gatherings in their backyard with party lights hanging from the big willow tree. Produce was shared from their large vegetable garden. After Reg’s passing in March 1993, Fay continued creating memories for her family. Grandchildren have fond memories of Grandma Fay and spending time at her home. They enjoyed swinging from the willow tree rope swing, playing in the treehouse, playing croquet and badminton in the backyard, playing dress-up, or roller skating around the neighborhood. Fay was an exemplary mother-in-law, respecting and honoring her children’s adulthood. A steadfast member of the Church of Jesus Christ of Latter-day Saints, Fay was a faithful visiting teacher throughout. Her most favorite calling she served in was as a Gospel Doctrine teacher, teaching weekly for seven years consecutively. She had a deep faith in her Savior, strong testimony of the gospel, and a love for the temple. She is survived by her four daughters: Valerie Keller Long, Tamara (Kerry Oldham, deceased), Rebecca (Rory Phister), (Doug Bassett, divorced), Wendi (J.Paul Ward); 21 grandchildren and 14 great-grandchildren. She is also survived by a sister Eunice Borgholthaus, a brother Darwin (Angela Henrie); sisters-in-law: Renee Henrie, Sharon Henrie, Joan Brand; brother-in-law Kenneth (Pauline Keller); and many nieces and nephews. She was preceded in death by her husband, Reginald Horton Keller; her son Glenn R Keller, a granddaughter, Hannah Ward, her parents, her siblings: Verl (Gladys Henrie), Leah (Emer Wilson), Argyle (DeLene Henrie), LaRue (Leon Nelson), Ivan Henrie, Melvin Carlos Henrie, and her brother-in-law, Don Borgholthaus. Funeral services will be held Friday, April 19 at noon at the River Heights Stake Center (800 S. 600 E.,River Heights, Utah 84321). A viewing will be held Thursday, April 18 at the Nelson Funeral Home (162 E. 400 N., Logan Ut 84321) from 6 to 8 p.m., and at the Church on Friday from 10:30 to 11:30 a.m. prior to the funeral. Fay will be buried beside her beloved husband, Reginald Horton Keller, and her son Glenn R Keller, in the Logan City Cemetery. The family expresses sincere love and appreciation to their sister, Tamara Oldham, who has watched over and cared for our mother in her home for many years. Condolences and memories may be shared with the family at www.nelsonfuneralhome.com

The family of Fay Henrie Keller created this Life Tributes page to make it easy to share your memories.

Send flowers to the Keller family.