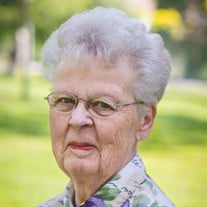 Faye Thornley Jenson, 84, passed away on Sunday, July 29, 2018 at the Legacy House in Logan, Utah. Faye was born in Logan, Utah on March 28, 1934 to Martha Melvina Weeks and Nathan James Thornley. Raised in Smithfield, Faye graduated from North Cache High School and soon thereafter married Charles Merlin Jenson, Jr. on May 14, 1953 in the Salt Lake City LDS Temple. Together Faye and Charles raised a wonderful family of four children and enjoyed 55 years of marriage before Charles passed away in 2008. The family spent their early years in Smithfield before moving to Lompoc, California in 1964. After 30 years and upon Charles’ retirement, they returned to their beloved Cache Valley in 1994 where she spent her final years close to her family and friends from her youth. Faye’s was a life of service, both to her family and to her community. As a young mother Faye was very active in her children’s schooling, serving in the PTA and as a room mother for each of her children during their elementary school years. She was employed for several years in the Vandenberg Junior High School lunchroom before starting her own successful home cleaning business. However, she always put her children first and was always home each day when they arrived from school. As a faithful member of the LDS Church Faye served at various times in her life as President of all of the different Church auxiliaries – the Relief Society, the Sunday School, the Primary, and the Young Women’s Organizations. Whenever or wherever there was a call to serve, Faye was always the first to volunteer. In her later years she prided herself in her service to the “Senior Citizens” of Smithfield, organizing and preparing the weekly luncheon and entertainment programs, all-the-while never considering herself to be one of the senior citizens. Faye is survived by her four children, Rulon (Jagjit) Jenson, San Diego, CA, Nathan (Eileen) Jenson, Littleton, CO, Robert (Dixie) Jenson, Everett, WA, and Eila (Kevin) Peterson, Hughson, CA; 15 grandchildren and 19 great-grandchildren, brothers-in-law Richard (Colleen) Jenson and Wayne (Sharee) Jenson, and sister-in-law Marjorie (Ken) Kraus. Her parents, three brothers and one sister preceded her in death. Funeral services will be at 12:00 noon on Saturday, August 4, at the Smithfield 24th Ward Chapel, 451 S. 250 East, with Bishop Steve Daniels conducting. Friends may pay their respects and meet the family from 10:30am to 11:30am at the Chapel prior to services. Burial will be in the Smithfield Cemetery.

The family of Faye Thornley Jenson created this Life Tributes page to make it easy to share your memories.

Send flowers to the Jenson family.