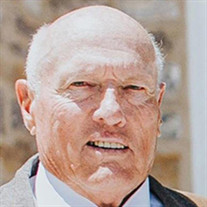 George Cleon Chambers passed away Friday, July 2, 2021 surrounded by his family. Cleon was born on February 11, 1935 to Noble Chambers and DeViva Munk Chambers. He lived all his life in Smithfield and graduated from North Cache High School in 1953. After high school, he served an LDS mission in the West Central States Mission, spending most of his time in Montana. He also served six months in the National Guard where his short cooking career began…and ended. At least it left him with the ability to make a mean piece of toast and jam. Cleon worked hard and saved enough money to buy a 59’ Chevy that he used to woo his future bride, Annette Roskelly. They were married August 7, 1959 in the Logan, Utah Temple of The Church of Jesus Christ of Latter-Day Saints. Together, they raised eight kids on their dairy farm. He was a busy father, farmer, and served in many church callings throughout his life as a devoted disciple of Jesus Christ. He loved serving on the high council, as a bishop, and for six years as a worker at the Logan temple. He had a passion for farming and it showed. He was the president of Smithfield Irrigation and served on the Utah State Dairy Commission as well as the county Farm Bureau Board. Through his service in the church and to the community, he met and influenced many people throughout the 86 years of his life. He loved the outdoors. He enjoyed snowmobiling every Wednesday and Saturday, as well as hunting, horse riding, and reloading. Later in life, he took frequent car rides up the canyon with his sweetheart and you could often find him at the gun range collecting brass. Throughout it all, he and his wife were most dedicated to their family. They never missed an opportunity to support their kids and grandkids at rodeos, ball games, and any other activity that was important to them. He will be greatly missed. He is survived by his wife of almost 62 years, Annette; his eight children, Lisa(Ron) Nielson, Denice(Kenny) Rawlings, Julie(Bryan) Wilkinson, Chris(Lari) Chambers, Stacy(Corey) Law, Shellie(Bruce) Anderson, Stephanie(Cory) Merrill, Amy(Ryan) White; his 51 grandkids, and his 25 (going on 29) great grandkids; his sister, Jolene(Russell) Elwood and brother Craig(Linda) Chambers. He was preceded in death by his parents, sisters, Luana Chambers and DeeAnn Valentine, and his brother Garth Chambers as well as his in-laws. Cleon’s family would like to thank Tender Care Hospice for their compassionate care during his final months. Funeral Services will be held Thursday July 8, 2021 at 12 noon in the Smithfield South Stake Center 451 South 250 East. Friends may call at the church on Wednesday evening from 6 to 8 p.m. and on Thursday from 10:30 to 11:30 a.m. Interment will be in the Smithfield City Cemetery. Condolences may be sent to the family online at www.nelsonfuneralhome.com.

George Cleon Chambers passed away Friday, July 2, 2021 surrounded by his family. Cleon was born on February 11, 1935 to Noble Chambers and DeViva Munk Chambers. He lived all his life in Smithfield and graduated from North Cache High School in... View Obituary & Service Information

The family of G. Cleon Chambers created this Life Tributes page to make it easy to share your memories.

Send flowers to the Chambers family.