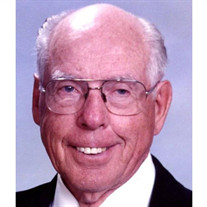 George Ellis Jeppesen of Smithfield, Utah passed away peacefully February 7, 2022, at Logan Hospital, surrounded by his loved ones. He was born on June 24, 1928, to William Wallace Jeppesen and Ethel May Brunker Jeppesen in Mantua, Utah. He was the sixth of nine children. In his youth, George was a high school athlete at Box Elder High School, where he participated in basketball and track. He also enjoyed spending time with his family, especially doing outdoor activities like camping, hunting, fishing, riding horses and motorcycles. He especially loved deer hunting, where he earned the respect of everyone for his great marksmanship - he never missed! Later in life he was able to pass his love of outdoor activities on to his own children. Throughout George’s life he loved singing, music, and participating in musicals and was very active in the Church of Jesus Christ of Latter-day Saints, where he sang in the ward choir. After high school he served a mission in Eastern Canada; where he was able to enjoy the sport of basketball on the Mormon Elders Team, helping to win the championship that year. He went on to serve during his lifetime in many callings, including being a member of the High Council, Bishopric, Stake Sunday School President at Utah State University, High Priest Group Leader, as well as an Ordinance Worker in the Logan LDS Temple, etc. In later life, he served an LDS mission with his wife to Sri Lanka and Malaysia. George honorably served his country as a communications specialist in the army during the Korean War. After returning, he met his wife, Alice Joy Koenig, at church in Long Beach, California and they were later married in the Logan LDS Temple on June 9, 1953. From this union 8 children were brought into this world. George worked at Hughes Air in Los Angeles, California and received a B.S. Degree in Business Administration from Long Beach State College in California, before moving to Smithfield, Utah to become a State Farm Insurance Agent. Starting from the ground up, he led this agency for over 30 years, and it was one of the largest in the State of Utah. He served as a City Councilman and the Justice of the Peace for Smithfield, Utah, where he was known for his fairness and integrity. In addition, for many years, he owned the Yamaha Motorcycle Shop in North Logan, UT with his brother Rex. In his later years, he was referred to as a gentleman farmer, as he realized his dream of farming. He had such a strong work ethic and spent hours in the fields farming hay and grain for himself and others. George was very talented and a jack of all trades. He could fix anything, especially in areas of plumbing, electrical, and cars. He built his own home with his sons and a friend and was always helping a neighbor with roofing, cement work, sprinklers, yardwork, and snowplowing. He was a great asset to the community and was greatly loved by friends and neighbors, as he served those that needed help on numerous occasions. It gave him great joy to give service to his fellowmen and to take care of his neighbors. George was preceded in death by his parents and siblings, Wallace Boyd, Rex Brunker, Marjorie, Daryl Dean, Richard Nephi, and a granddaughter, Wendi Kay Quinn. He is survived by his wife of almost 69 years as well as his children, Curtis Craig (Valerie) Jeppesen of St. Anthony, ID; Kyle Koenig (Jeanette) Jeppesen of St. Anthony, ID; Karla Kay (Kevin) Jensen of Salt Lake City, UT; Kent Edward (Brooke) Jeppesen of Chester, ID; Krista Joy (Chris Derr) Staggie of Logan, UT; Kenna Loye (Dean) Kimber of South Windsor, CT; Katha Lyn Taylor (Ernie) of Logan, UT; and Kelly George Jeppesen of Providence, RI; 40 grandchildren, 80 great grandchildren, and 2 great, great grandchildren; and siblings, Harper Nels Jeppesen of Brigham City, UT; Lillis Mae Tonks of Highland, UT; Gary Norton Jeppesen of Tyler, TX. Our family welcomes all to come to the Viewing at the LDS North Smithfield Stake Center Building at 155 West 400 North in Smithfield, Utah on Sunday, February 13, 2022 from 6:00 – 8:00 p.m. or a Viewing on Monday, February 14, 2022 from 9:30-10:30 a.m. The Funeral Service will be held at this location on Monday February 14, 2022 at 11:00 a.m. with a Luncheon at the church after the Graveside Service.

George Ellis Jeppesen of Smithfield, Utah passed away peacefully February 7, 2022, at Logan Hospital, surrounded by his loved ones. He was born on June 24, 1928, to William Wallace Jeppesen and Ethel May Brunker Jeppesen in Mantua, Utah. He... View Obituary & Service Information

The family of George Ellis Jeppesen created this Life Tributes page to make it easy to share your memories.

Send flowers to the Jeppesen family.