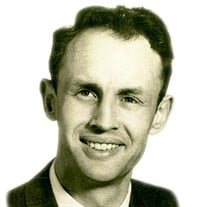 George Russell Johnson, 89, a kind and devoted husband, father, grandfather and great-grandfather returned to his heavenly home February 28, 2019. He was born September 29, 1929 in Logan, Utah to George Elmer and Lucile Clara Bateman Johnson. He attended 1st - 8th grade at Collinston School and finished at Bear River High School in 1948. He graduated from Utah State University in 1952 with a B. S. Degree in Industrial Education and a M.S. Degree in 1961. He served from 1952 – 1954 in the military as a 2nd Lieutenant, part of which was with the army of occupation in Germany. From 1955 - 1986, he taught at both Bear River Junior High School and Corinne Elementary. Russell married Marilyn Clark in the Logan Temple on December 23, 1953. Marilyn was able to be with him the final year of his tour in Germany. They lived in Garland, Utah for five years and added three children to their family, then made their final move to Beaver Dam and added three more. They served a mission in the LDS Motion Picture Studio in Provo, Utah from 1999 - 2000. Their Golden Wedding Anniversary was celebrated in 2003 with family and friends in a reception center Russell remodeled from a barn built years earlier by his father. Russell served in numerous church callings: Scout Explorer Leader, Ward Clerk, Bishop’s Counselor, High Priest Group Leader, various teaching assignments, and as a faithful Home Teacher. He served seven years as an officiator in the Logan Temple. Hobbies included remodeling rental units; building clocks, cupboards, cedar chests; beekeeping; photography; and reading. He is survived by his wife, Marilyn Clark Johnson; his children and their spouses: Greg and Fe Johnson of Spanish Fork, UT; Mike and Sheri Johnson of Orem, UT; Larry and Inga Johnson of Brigham City, UT; Jeff and Penny Dickerson of Sauk Rapids, MN; Russell Clark Johnson of Nashville, TN; Paul and Lindy Taylor of Pleasant Grove, UT; brothers: Ellsworth and Etta Johnson of Bluffdale, UT; Rulon and Margaret Johnson of Nibley, UT; sister: Diane Johnson Barker of Kaysville, UT; 19 grandchildren and 19 great-grandchildren (soon to be 21). Funeral services will be held at 11 a.m. Friday, March 8, 2019 at the Beaver Dam LDS church (16025 N. Beaver Dam Rd) with a viewing time at 9:30 a.m. Another viewing will be held Thursday evening (March 7) at the church from 6 – 8 p.m. Arrangements under the care of Nelson Funeral Home in Logan, Utah. Condolences may be sent to the family online at www.nelsonfuneralhome.com.

The family of George Russell Johnson created this Life Tributes page to make it easy to share your memories.