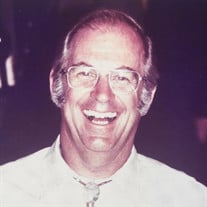 George Welling Preston, known to his family and friends as Jud, was born in Logan, Utah on April 26, 1932 to Virginia Brackett Welling and George Dollinger Preston. He was the eldest of two brothers. He lived his entire life in Logan and Bear Lake, and became an integral part of those communities. Jud grew up in the tumultuous years between WWI and WWII. He attended USU and later University of Utah Law School, graduating in 1960. Jud was a very proud member of the US Air Force. He flew out of Hill Air Force base from 1954 to 1962 and flew C-119s and B36s. He was proud to have been in the Air Force and to have served this country, and maintained a keen interest in airplanes all his life. Following his service in the USAF, Jud returned to Logan and joined his father in the law firm Harris and Preston, and carried on the family business his whole life. He served many people in the Cache Valley community as a private attorney, but over the years he also served several terms as a district attorney for Cache County and later for Rich County. Jud was an avid skier, incredible sailor, and loved his motorcycles and guns. He was very adept with his hands and made a variety of black powder rifles and, in later years, beautiful knives. He made sails for numerous sailboats, took apart and put back together motorcycle engines, and built his cabin at Bear Lake. Jud joined the Beaver Mountain ski patrol at age 16, and became a dedicated and skilled patrolman, eventually serving for sixty years on the National Ski Patrol at Beaver. At retirement at age 82, he was the oldest active ski patrolman in the US and is still an honorary member. The Ski Patrol was a family to him. As an active member and sometime officer of the Bear Lake Yacht Club, he and his family raced sailboats together for many years; he was acknowledged as a fierce and skilled competitor. BLYC was another extended family: lifelong friendships and a very caring and supportive community were a huge part of his weekend life at Bear Lake. Jud didn’t limit his sailing experiences just to Bear Lake, though. Numerous sailing trips to the British Virgin Islands with friends and family provided stories which never grew tired in the retelling. He was also an avid motorcycle rider and loved his biannual trips to the dunes and throughout Moab and Colorado with his friends, broken bones not withstanding. Jud was a member of the LDS church and that connection became even more important in his later years as the community there provided great comfort to him in the aftermath of his wife’s death. The love of his life was Janet Eggen. They married in 1984 and spent the happiest parts of their lives together for 23 years, 7 months, and 1 day. Yes, he was counting. Jud was respected for his integrity, honesty, and values. He was loved for his humor, competitiveness, and willingness to help others. He was preceded in death by his brother Patrick and is survived by his three children, Michael (Shonagh), Stephen (Heidi), and Peggy (Jody), and three step-children, Ward, Wendy, and Todd (Susan), as well as grandchildren and great-grandchildren. He is loved by many and will be sorely missed by those who were fortunate enough to have known him. Funeral services will be held Friday, May 31, 2019 at 12:00 p.m. in the Nelson Funeral Home Chapel, 162 East 400 North, Logan. Interment will be in the Logan City Cemetery with military rites.

George Welling Preston, known to his family and friends as Jud, was born in Logan, Utah on April 26, 1932 to Virginia Brackett Welling and George Dollinger Preston. He was the eldest of two brothers. He lived his entire life in Logan and Bear... View Obituary & Service Information

The family of George Welling Preston created this Life Tributes page to make it easy to share your memories.

George Welling Preston, known to his family and friends as Jud,...

Send flowers to the Preston family.