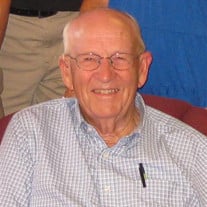 Gerald Duane Cannon (Jerry) passed away early Tuesday morning, October 20, 2015 in Logan, Utah. Jerry was devoted to God and his family. All of his family and friends take solace that he is with his Savior now. Jerry was born to Zebulon and Sarah Cannon in Canistota, South Dakota on July 22, 1926. He graduated from Canistota High School in 1944. After graduation he joined his father, Zeb Cannon, to work on the family farm. He enlisted in the army shortly thereafter and served two years. During his military service, he married Mary Caroline Borman, his high school sweetheart, and after his honorable discharge from the army, they moved to the family farm where they lived for 25 years. Jerry and Mary had three boys, Richard, Jim and Roger. Jerry’s wife Mary died at age 46 on July 28, 1972. Jerry continued to farm up and after his father Zeb’s passing in 1974. Jerry met Mary Hartman in 1973 and they were married on April 26, 1974. Mary lived in Sioux Falls, SD and had six children: Ken, Doug, Carolyn, Eric, Kathy and John. Jerry and Mary were devoted parents to all their children and embraced each as their own. Mary and John moved to the family farm with Jerry, where they lived until after John graduated from high school in 1978, whereupon Jerry and Mary moved to Sioux Falls. Jerry took on a new career of selling nutritional supplements for livestock while still maintaining the family farm. In the early 1990s, Jerry retired and a few years later he and Mary moved to Logan, Utah to be near family. Mary died on November 23, 2000 and Jerry continued to live near his family in Logan until his death. Jerry was a humble and gentle man of great resolve. He was steadfast in his faith and devoted to his family. Everyone who came in contact with Jerry, even if briefly, was touched by his kind spirit and warm, open heart. He truly reflected the love of Christ through his kind and generous service to others, including the years he faithfully volunteered to transport countless people from the hospital parking lot to the front door in his stylish golf cart. Jerry was a magnet for meaningful relationships, both young and old. Even after the death of his second wife, Mary, he continued to build strong friendships with neighbors, students, and acquaintances from church. He was often teased about the endless amount of pies constantly being delivered to his house by a wide range of single women. As a father, Jerry was loving, patient, fun, and so easy to talk to. As a grandparent, he was a rock star. He attended as many sporting events, concerts, and graduations as he possibly could. His grandchildren simply adored him. In his last 15 years as a widower, Jerry became a big Utah State Aggie fan and became a basketball season ticket holder for many of those years. Jerry was preceded in death by his parents, his sisters Gladas S. Cannon and Hazel Cannon Likeness, his first wife Mary C. Cannon, his grandson Nathan J. Cannon, and his second wife Mary L. Cannon. He is survived by his sons, Richard (Roberta) Cannon of Eagle River, Alaska, Jim (Edie) Cannon of Santa Cruz, California, Roger (Wendy) Cannon of Raleigh, North Carolina; step-children Ken Hartman of Rapid City, South Dakota, Doug (Jill) Hartman of Fremont, Nebraska, Carolyn Shaw of Sandy, Utah, Eric (Tacy) Hartman of Salt Lake City, Utah, Kathy (Vince) Eccles of Logan, Utah, and John (Jennifer) Hartman of Logan, Utah; and 16 grandchildren and 6 great grandchildren. A memorial service to celebrate Jerry’s life will be held at Alpine Church in Logan at 11:00 AM on Saturday, October 31st. A memorial service and graveside ceremony will also be held in Canistota, South Dakota at a later date. Just as Jerry was generous and giving, the family requests that in lieu of flowers, donations be made to your local church or a charity. Condolences and memories may be shared online at www.nelsonfuneralhome.com

Gerald Duane Cannon (Jerry) passed away early Tuesday morning, October 20, 2015 in Logan, Utah. Jerry was devoted to God and his family. All of his family and friends take solace that he is with his Savior now. Jerry was born to Zebulon and... View Obituary & Service Information

The family of Gerald Duane Cannon created this Life Tributes page to make it easy to share your memories.

Send flowers to the Cannon family.