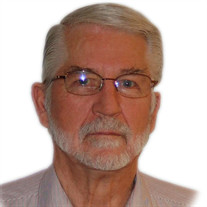 Providence - Gerald Wyatt Green, 80, passed away suddenly of a heart attack at his home April 25, 2018. He was born at home in Wellsville, Utah, in December 1937, to Roger Scott Green and Syble Jemima Hall Green. He attended elementary and junior high in Wellsville and graduated from South Cache High School in 1956. Gerald married his sweetheart, Deon Kay Anderson, in Preston, Idaho in 1956 and was sealed to Deon in the Logan Temple in 1957. He entered the Air Force in March 1957 and was stationed at Lackland AFB in Texas; then was stationed at Chanute AFB in Rantoul, Illinois where Randall Gerald Green was born. Then reassigned to Castle AFB in Merced, California in 1958 where Kelly Theresa Green was born. After an honorable discharge in February 1961 they moved back home to Utah. They lived in various places in Cache Valley until they settled in their final home in Providence in 1961. Gerald loved to camp, hunt, fish, snowmobile, and golf. Gerald and Deon enjoyed sharing all these activities with their family and friends. They spent many a weekend in the camper, rain or shine, visiting all sorts of places in the Intermountain West. They especially enjoyed their time spent in Island Park. He worked at Thiokol for a short while until he was laid off. He then worked various jobs: assisting his father-in-law in the plastering business, mowing along the highways for the state, and in 1962 was hired on at Hill Field AFB as Aircraft Maintenance. He worked on F-101s, F-4s and later on F-16s until his retirement from Hill in 1993. In his later years, he found his passion in Genealogy and in his faith in the LDS church. He held various positions within the Priesthood. He enjoyed researching his and Deon’s family history. Gerald shared that passion with other members of the church by helping them learn the tools to find their own family history. He served at the Family History Center in Logan, Utah, for several years. He will be missed but not forgotten by his family and the friends that he has made in life’s journey. Survived by his son Randall (Janet) Green of Chillicothe, Ohio, daughter Kelly Green of Riverdale, Utah; Grandchildren Emerald (Dayne Teigeler) Green, Whitney Green, Jeremy (Jennifer) Green, Tyrin Brown; Great-grandchildren Piper, Rowan, Morgana, Ari, Saidji, Madeline, Cordelia; brother Loyal (Candice) Wyatt Green of Providence and sister Doris Wyatt Green Mayer of Wellsville. Proceeded in death by parents Roger and Sybil Green, wife Deon, an infant daughter, brother Boyd Wyatt Green, brother-in-law Leroy Mayer. A viewing for friends and family will be held Friday, May 4, from 6 PM to 8 PM at the Nelson Funeral Home, 162 E 400 N, Logan Utah. On Saturday, May 5, there will be a viewing from 9:30 AM to 10:30 AM prior to the Funeral Services held at 11:00 AM at the Providence 2nd Ward Church House, 355 Canyon Road, Providence, Utah. Gerald will be interred at the Wellsville Cemetery in Wellsville.

Providence - Gerald Wyatt Green, 80, passed away suddenly of a heart attack at his home April 25, 2018. He was born at home in Wellsville, Utah, in December 1937, to Roger Scott Green and Syble Jemima Hall Green. He attended elementary and junior... View Obituary & Service Information

The family of Gerald Wyatt Green created this Life Tributes page to make it easy to share your memories.

Send flowers to the Green family.