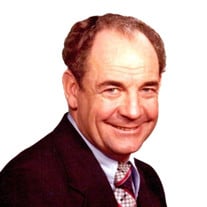 Gerald Clifton Henrichsen (Jerry) passed away on Wednesday, March 10, 2021 at the age of 86. He was born January 6, 1935 in Salt Lake City, Utah, to Clifton and Mabel Henrichsen. He had one sister, Beverly. He lived the majority of his life in Providence after growing up in Smithfield with some time in Bountiful and California. Like his father, Jerry served a two and a half year mission for the Church of Jesus Christ of Latter-Day Saints in Denmark. Jerry met his lifelong sweetheart, Beth Cantwell, while in grade school in Smithfield, Utah. They began dating in high school and upon his return from the mission in Denmark, were married in the Logan Temple on November 20, 1958. They celebrated just over 60 years of marriage before Beth passed away in October of 2019. Jerry was a devoted husband, father, and caregiver to his eternal companion. Jerry had a lifelong love of the great outdoors. His greatest passion was climbing the Grand Teton mountain in Wyoming and guiding countless others to its top over a span of 20 years. He enjoyed river rafting, camping, and playing basketball at the church. His love for the outdoors made him a popular Scout leader! Jerry worked the majority of his life as an engineer for IBM which took him all around Cache Valley and neighboring states. He was a member of the Church of Jesus Christ of Latter-Day Saints and enjoyed serving in a bishopric as first counselor. He loved helping others; his family was his top priority. Jerry is survived by his son, Brett, and was preceded in death by his wife, Beth, sister Beverly Coleman (Denton), and his parents. The family expresses their sincere appreciation for the special care given to Jerry by Nancy Cantwell and Ailini Pauni, the Providence 5th Ward, Jim Meacham, Dwain Hancey, Jan Wigington, Phil Williams, the Beckstrand’s, Daryl Duffin and Bishop Eric Stauffer. We appreciate all of the wonderful friends, neighbors and family that have cared for Jerry and Beth throughout these past years. Thank you for your love and many acts of kindness. Funeral services will be held at 11 a.m., Saturday March 13, at the Providence 5th Ward Chapel, 355 Canyon Road, Providence, UT 84332. Friends and family may call between 10:00 and 11:00 a.m. prior to services at the church. Interment will be in the Smithfield Cemetery following the funeral services. Funeral will be broadcast on ZOOM at the link below. Join Zoom Meeting https://us02web.zoom.us/j/83651716669?pwd=aitna1VGWmlTekJ0Mzlwc1g1THlUQT09 Meeting ID: 836 5171 6669 Passcode: Henrichsen

Gerald Clifton Henrichsen (Jerry) passed away on Wednesday, March 10, 2021 at the age of 86. He was born January 6, 1935 in Salt Lake City, Utah, to Clifton and Mabel Henrichsen. He had one sister, Beverly. He lived the majority of his life... View Obituary & Service Information

The family of Gerald Clifton Henrichsen created this Life Tributes page to make it easy to share your memories.

Send flowers to the Henrichsen family.