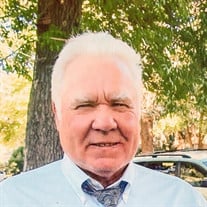 Gerald William Mather (Gary) was born October 7th,1946 in Lewiston, Utah to Conard Harry and Erma Johnson Mather. He lived in Smithfield, Utah most of his life. Gary is preceded in death by his son Gary Jay, brothers Garth Henry and C. Glade, and his parents. He is survived by his wife and loving eternal companion Rosaura Rincon Mather, his children Margaret Mather Bennion, Ellis Mather, Fred Ambrose (Judith), Elizabeth Granados (Isaac), M. Allan Ambrose Jr. (Alicia), Peter Ambrose, 17 grandchildren, and sister Guila Mather Bitner (Jeff). Gary started helping his father with the family farm early in life. He played baseball at North Cache High, graduating in 1964. He served a mission for the Church of Jesus Christ of Latter-day Saints in the California North Mission, where he built the foundation of his faith and testimony and immense love of missionary work. He graduated from USU in Agriculture Education. He later met Rosa at Gossner’s and they were married on February 24, 1996. They were later sealed for time and all eternity in the Ogden Utah Temple. His work included managing dairy farms like Dairy Capita, and at Greyhound as a mechanic. Gary dedicated his life’s work to his Smithfield farm and believed in running his business with integrity. He was enduring and sacrificed more than most know to provide for his family, including supporting his father in retirement. His wife Rosa, and mother Erma were his greatest supporters. Gary was an avid Jazz and USU Aggies fan. His grandchildren will remember him for his tractor rides, rows of tall corn stalks, and supporting them in important events. He helped each of his 11 children find their first car. Gary left this life sooner than family and friends hoped on November 6, 2021 due to a severe stroke, with family at his side. A public viewing will be held on Saturday, November 13, 2021 from 11 am - 12:30pm followed immediately by funeral services at 1 pm at the Smithfield 9th Ward Chapel, 660 W 200 N Smithfield, UT. Interment at the Smithfield City Cemetery immediately following the funeral services.

The family of Gerald William Mather created this Life Tributes page to make it easy to share your memories.