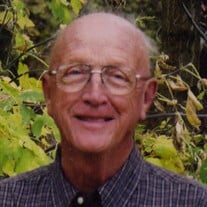 SMITHFIELD – Gone to find the best fly fishing stream in heaven. Gilbert William Hansen, 88, passed away August 27, 2016, at his home in Smithfield, Utah. He was born July 29, 1928, in Newton, Utah, to Varion William and Mable Ellen Hansen. He was the youngest of three children. He married Martha Ransbottom on October 10, 1949, and they were later sealed in the Logan Temple. They would have celebrated their 67th wedding anniversary this year. Gib had two great passions in his life – fly fishing and woodworking. He found great satisfaction in studying the stream, tying the perfect fly, and catching the big one of the day. His joy of fly fishing was only exceeded by his love of woodworking. He served in the bishopric and as a stake auditor. Gib was a master electrician and a skilled troubleshooter. He had the intuition and patience to solve any electrical problem and was always willing to help anyone who asked. He retired from the Electrical Department of Utah State University’s Physical Plant in 1991 after 30 dedicated years of service. He was one of the founding organizers of the first USU Classified Employee Association, which to this day provides representation for thousands of USU employees with university administration and the state legislature. He served on the Smithfield Irrigation Company Board of Directors for 10 years and was instrumental in the implementation of the secondary water system throughout the city. He was preceded in death by his infant daughter, parents, his two sisters Donna and Dorthy, and his daughter-in-law Susan. He is survived by the love of his life, Martha, son David, daughters Janalee (John) and Jerilyn (Craig), and his granddaughter Melissa. He also leaves behind his two precious armchair companions, Sparky and Millie. We will never forget you, Dad, and will always love you. Thanks for thinking we were better than we are and for being the best listener any of us ever knew. We know the greatest streams in heaven will soon see a new fisherman – catch another big one for us, Dad. At Gib’s request, there will be no public viewing. A graveside service will be held Friday, September 2, 2016, at 11:00 am in the Whitney, Idaho cemetery. Condolences and memories may be shared with the family on line at www.nelsonfuneralhome.com

The family of Gilbert W Hansen created this Life Tributes page to make it easy to share your memories.