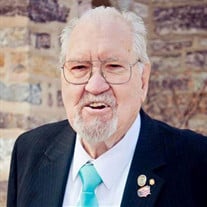 Gilbert Lyon Phillips, 91. June 14, 1925- May 1, 2017. Smithfield, UT. Gilbert passed away at Logan Regional Hospital after complications from surgery. Gilbert was born at home in Smithfield, Utah on June 14, 1925 to Alice Lyon and George William Phillips. It was the beginning of a long and eventful life. He grew up in Smithfield along with his older siblings, Lucille, Ivan, Margarite and Harold. Gilbert attended North Cache High School where he met the only true love of his life, Ruth Lavine Galbraith. He tried to take her to a school dance as a Senior and was too embarrassed and nervous to ask a girl as pretty as Ruth. But (from his words) the spirit pushed him to ask her to the dance and told him he was going to marry that girl. He graduated from North Cache High School in 1943, and was drafted into the Army Air Force. He was stationed in Germanyworking as a quartermaster assisting in the war efforts; providing quarters, rations, clothing, and other supplies to the troops. After serving in the military, he continued his service. This time for the LDS church serving a full-time mission in the North Central states. Gilbert and Ruth reconnected after his stay in Germany. They fell in love and were married in the Logan temple on October 26, 1951. They loved spending time together traveling the world when he was home from his construction jobs and after the children had grown. They had the opportunity to travel to Holland, France, Germany, Switzerland and all over the United States. Gilbert was a devoted member of the church of Jesus Christ of latter day saints his entire life. One of his most treasured memories was serving his second mission as a couple with Ruth in North Texas. Gilbert worked for 13 different construction companies in his lifetime. He worked with Parsons for over 25 years. He also worked with Morris and Knudsen. One story he prided himself in telling was hauling the first load of lumber to CantWell’s from Bloomington, ID. Gilbert worked numerous construction projects throughout Northern Utah; helping complete 1-15 through Sardine Canyon to Ogden. He shared many stories of taking a loader to Antelope Island to cut fire lines in the hill when a wildfire ravaged the area years ago. Gilbert was known by many to be both mentally and physically strong; Enduring many trials in his life. He was hardworking and never complained of pain that would have a normal man in tears. He worked with Del Monte and was able to grab 100 lb bags of sugar in each arm as a younger man. Gilbert is survived by his brother Harold Phillips. His children RuthAnn (Ron) Munns, Michael (Annabel) Phillips, Dixie Mandler, Michelle (Robert) Brown, Jaynee (Randy) Nielsen, Troy Phillips, Melody (Rory) Lutz, and Christopher (Alisa) Phillips and a daughter in law Linda (Dea) Phillips. He was blessed with over 115 grandchildren, great-grandchildren, one great-great-grandchild. He is preceded in death by his wonderful wife Ruth, his son Tracy, his brother Ivan, his sisters Lucille and Margarite, and great granddaughters Kyleigh Ruedas and Myla Keetch. Gilbert’s children have blessed him with a combination of 115 grandchildren, great-grandchildren, and one great-great-grandchild. What a joyous reunion the heavens viewed when his entire world, the love of his life, Ruth, greeted him with open arms. And the joy that must have overwhelmed him to be with his son Tracy again. Gilbert leaves a legacy for numerous grandchildren and and great grandchildren. His did not pass away leaving anyone to remorse over the undone, and his testimony of the gospel of Jesus Christ will be remembered by everyone that has known or spoke with him. He lived to the fullest potential. Not one aspect of his life is cause for scorn, regret, or is marred in anyway. While we are sad as his passing, the best course of action is to live like him and be fortunate to leave this earth as he did surrounded by loved ones. Funeral services will be held Friday, April 7, 2017 at 12 noon in the Smithfield North Stake Center, 400 North 200 West. Friends may call at Nelson Funeral Home, 85 South Main, Smithfield on Thursday evening from 6 to 8 p.m. and at the church on Friday from 10.30 to 11:30 a.m. Interment will be in the Richmond City Cemetery with Military rites.

The family of Gilbert Lyon Phillips created this Life Tributes page to make it easy to share your memories.

Send flowers to the Phillips family.