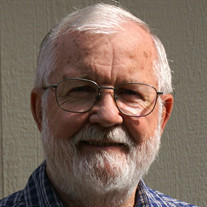 Glen Lyman Edwards, loving husband and father of one son, lost his battle to Cancer on Saturday, August 3, 2019 at the age of 83. He passed away at his home in Smithfield, Utah. Glen was born October 14, 1935 to George Franklin Edwards and Thelma Comish (Larsen) Edwards at Preston Idaho where he grew up and attended Preston High School. Glen was a natural leader and good athlete aspiring to becoming a professional basketball player until he ended up being only 5’5”. He also had budding artistic gifts and his High School Coach, Ev Sorenson, recognizing this took Glen upon graduation to Utah State University and introduced him to Ev Thorpe, a painting professor in the Art Department. Glen received an Undergraduate Degree in Graphic Design at USU and set off to work for Thiokol Chemical Corporation. Soon realizing he wanted to be an Illustrator and not a Graphic Designer, Glen went to Pasadena California to attend the Art Center College of Design. He loved school here but left early and returned to Utah State University to earn a Master’s Degree in Illustration. He began teaching courses in the Art Department before earning his Master’s and The Art Department Head, Harrison Groutage asked him to stay and teach at USU permanently. Glen had never considered teaching but decided to do so and was an incredibly gifted teacher. In 1968 he was put on a split contract where he managed USU Graphic Services and also taught two classes a quarter. He soon was teaching full time and doing art for the University where he stayed for 32 years retiring in 2000. Towards the end of his tenure at USU his love of painting inspired him to create fine art watercolor and oil paintings for Galleries throughout the West and upon retirement continued to paint to that end until his death. In 1976, Glen married Barbara Summers. Unable to have children they decided to adopt and were greatly blessed to have a newborn baby boy, born in Mexico added to their family in 1982. They named him Charlie Glen Edwards and Charlie was the wonderful son they always wanted. Glen couldn’t remember a time when he didn’t have a testimony that the Church of Jesus Christ of Latter-Day Saints was the Lord’s Church restored to the earth and his testimony and faith of that always shone forth in his life and dealings with his fellow men. He loved and served the Lord valiantly through his entire life, serving a 2 ½ year mission to New Zealand the country of his father’s birth. He maintained a lifelong love of New Zealand and the Maori people and culture returning twice, the last time in 2007 taking his son to share that love with him. He taught classes in Gospel Doctrine and High Priests Quorums decades at a time and also served in two Bishoprics as Second Counselor. Serving as Counselor in the Logan 2nd Mid-Singles Ward until a year before his death was a great joy for him and he loved those “kids” abundantly. He also greatly loved his family, painting and the wonderful students he had taught and his face always lit up when he got to see and interact with them in any way. Glen was preceded in death by his father, George; mother, Thelma; stepfather, Artel; sister, Alice and sister-in-law, Deanna. He is survived by his wife, Barbara; son, Charlie; brother, Norman (Norma); brother, Clifford and many cousins, nieces and nephews. The Edwards Family would like to thank Dr. S. and all of the other Doctors, Nurses, Technicians and Staff at the Logan Regional Hospital and Gossner Cancer Center for their kind and gentle care of Glen in his fierce battle with Cancer. We appreciate them and all they did so much. Glen was never really a flower person so in lieu of flowers please donate to the American Cancer Society or the Church of Jesus Christ of Latter-day Saints Humanitarian or Continuing Education Fund. We are so grateful too for the love and concern of the numerous friends and family who have reached out to us at this difficult time...we a greatly blessed by you. Funeral services will be held Saturday, August 10, 2019 at 12 noon in the Smithfield 7th Ward Chapel, 79 East 200 South. Friends may call at the church on Friday evening from 6 to 8 p.m. and on Saturday from 10:00 to 11:30 a.m. Interment will be in the Smithfield City Cemetery. Condolences may be sent to the family at www.nelsonfuneralhome.com.

Glen Lyman Edwards, loving husband and father of one son, lost his battle to Cancer on Saturday, August 3, 2019 at the age of 83. He passed away at his home in Smithfield, Utah. Glen was born October 14, 1935 to George Franklin Edwards and Thelma... View Obituary & Service Information

The family of Glen Lyman Edwards created this Life Tributes page to make it easy to share your memories.

Send flowers to the Edwards family.