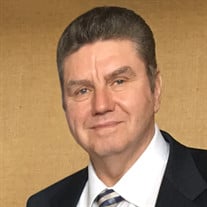 Glen Morris Godfrey, age 66, passed away June 19, 2018 after a brief and hard-fought battle with cancer. He was born November 28, 1951 in Logan, UT to Nathan Rulon Godfrey and Flo Thompson Godfrey and was the youngest of nine children. Glen was a true farm boy and proud to call Clarkston home. He truly loved his town and the land he worked on his whole life. He enjoyed many things, but really couldn’t wait to finish up whatever it was so that he could get back out on his tractor. Farming was in his blood and a passion of his. After high school, Glen joined the Army Reserves and served in that capacity for many years and was proud of his service to his country. After returning home from basic training, Glen found the true love of his life, Ann Jorgensen. After a few years of dating, Glen and Ann were married for time and eternity in the Logan, Utah Temple on May 12, 1972. Over the next 46 years, if you couldn’t find Glen on his tractor chances are he was by his sweetheart’s side – they were inseparable and loved each other as much as two people could. Glen was a hard worker and always active. He worked for Jardine Petroleum for 30 years driving a truck and hauling fuel. He then worked as a custodian for Logan City School District for 14 years. Glen loved his children: Patrick, Michael, Melanie and Robert and worked hard to provide for them. He absolutely adored his grandchildren and worked just as hard to love and spoil them every chance he got. He was often heard saying, “I need a grandkid fix” whenever he thought it had been too long since he’d had a chance to see one of his 10 grandchildren. We love and will miss Glen dearly but know he had completed his earthly journey and was called home to complete his mission in heaven. We are comforted by the thought of his heartfelt reunion with his family on the other side especially his baby boy Michael. Glen is preceded in death by his baby son Michael Ray Godfrey, his parents Nathan and Flo Godfrey, his sister, Betty Priscilla Godfrey, his in-laws Ray and RaNae Jorgensen. He is survived by his best friend and wife, Ann J Godfrey, Son Patrick Godfrey his wife Mardee and their children; Kasadee, Toree (currently serving in the Brazil Sao Paulo North Mission), Bailee, Sydnee, Ainslee and Cooper of Heber City, UT, Daughter Melanie Comadena her husband KC and their children; Ellis and Rockwell of North Logan, UT, Son Robert Godfrey his wife Kayla and their boys Bentley and Greydee of Rigby, ID. Also survived by his seven brothers and one sister, their spouses and numerous nieces, nephews and their children. Another one of Glen’s famous quotes was ‘When it’s all said and done all you’ve got is your family’ and embodied this message by being a loving and selfless man all his years. We are blessed to have had Glen and his example in our lives and know he is watching over us. A viewing will be held Thursday June 21st at Allen Mortuary at 420 North 1800 East in North Logan from 6:00-8:00 PM. A viewing will be held at the Clarkston Church House Friday June 22nd from 10:30-11:30 AM with a funeral to follow at 12:00 PM. Glen will be laid to rest at the Clarkston Utah Cemetery. Condolences and memories may be shared with the family at www.nelsonfuneralhome.com

Glen Morris Godfrey, age 66, passed away June 19, 2018 after a brief and hard-fought battle with cancer. He was born November 28, 1951 in Logan, UT to Nathan Rulon Godfrey and Flo Thompson Godfrey and was the youngest of nine children. Glen... View Obituary & Service Information

The family of Glen Morris Godfrey created this Life Tributes page to make it easy to share your memories.

Send flowers to the Godfrey family.