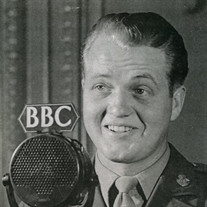 Glen Rex Hansen passed away peacefully on Jan 28, just 11 months after his sweet wife Martha and 2 weeks before his 102nd birthday. He was born in Logan, Utah to Moroni and Nora Hansen in their home @ 648 North Main Street. Glen grew up in Logan, attended Logan schools and graduated from Logan High School in 1938. As a young boy he worked hard at any jobs available during the depression. Glen was one of many who joined the Army Air Corps to serve his country during World War II. He spent the war flying raids over Germany. He received many medals for his service including 2 Purple Hearts, 2 Silver Stars, 4 Air Medals, 1 Distinguished Flying Cross, and a letter of Commendation from Winston Churchill, Prime Minister of England. He shared his war experiences with many youth groups and always desired to have the younger generation understand what it means to be a proud American. After 4 years of service in the Air Corps, with an honorable discharge, he returned to Utah, and married Jean Neff of Salt Lake City on May 24, 1946. They were blessed with 2 daughters, Susan and Sherry, while living in Washington State, where Glen and Jean lived most of their 33 year marriage. Glen was an Office Machine Representative and distributed office machines mainly in Washington, Alaska and Hawaii. He was a workaholic and enjoyed the many years of travel. He was able to retire in 1979, shortly after the death of his wife Jean. Glen returned to Logan to live after his retirement. Upon arriving in Logan Glen looked up a dear high-school friend who had been a widow for many years. He married Martha S. Harward on August 13, 1979. They were together for almost 42 years before her passing on March 1, 2021. They had lived at Legacy House of Logan for the past 9 years and enjoyed the many friends they made there and considered them all family. Glen is survived by his daughter Susan (Jim) Perkins of Manson, Washington, 3 grandsons and 2 great grandchildren and many nieces and nephews and their families. He is also survived by Martha’s children, Stephen (Marie) Harward, Richard (Martha) Harward, Geri (Jim) Kofoed and Patti (Brooks) Rash, 16 grandchildren, 29 great grandchildren and 3 great great grandchildren. He had been a part of this family for so many years; he was the only “grandpa” they knew. They loved his stories and his $2 bills. Glen was preceded in death by wife Jeanie, wife Martha, his parents, all of his siblings, granddaughter Mandy and his daughter Sherry Berger who passed away just 2 weeks after Martha in March 2021. There will be a short graveside service at Logan City Cemetery on Feb. 5, 2022 at 1:00 p.m. All family and friends are invited to attend. Services under the direction of Nelson Funeral Home, Logan, Utah.

Glen Rex Hansen passed away peacefully on Jan 28, just 11 months after his sweet wife Martha and 2 weeks before his 102nd birthday. He was born in Logan, Utah to Moroni and Nora Hansen in their home @ 648 North Main Street. Glen grew up in... View Obituary & Service Information

The family of Glen Rex Hansen created this Life Tributes page to make it easy to share your memories.