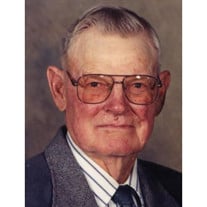 Glen William Hillyard, also known as ?Crow?, died peacefully of natural causes in his home, surrounded by his family on Monday, Dec. 13, 2010. He was born on the homestead at the base of Crow Mountain North of Smithfield, Utah on Dec. 15, 1923. He died just 2 days shy of his 87th birthday. Glen grew up north of Smithfield. He attended local schools & graduated from North Cache High where he excelled at basketball & was given the nickname ?Crow? by his coach. He convinced Jackie Hansen to be his bride on Feb. 27, 1946; they were later sealed in the Logan LDS Temple. Together, they raised a family of five children, Dixie Lee Skabelund of Centerville, John Janet Willmore of Smithfield, Sheri Andersen Murray Glenn of Smithfield, Leisa Christensen Dale of Smithfield, & Angela Heaps Michael of Smithfield. They have 18 grandchildren & 26 great grand children. He is also survived by his younger sister MarJean Anderson of Newton. During his working years, Glen touched the lives of many. He was employed by Del Monte Pack, U & I Amalgamate Sugar in Lewiston, local feed stores, Jack Parson Construction, Utah State University, & the Cache County Road Maintenance Crew. He then retired to live his dream as a sportsman & full time farmer. He was always known for his excellent horsemanship. In his younger years, Glen was a member of the Summit Saddlers Riding Club & participated in many rides in the mountains. Glen was an avid hunter & loved spending time on a horse in the hills hunting deer & elk. He was instrumental in promoting & participating in cutter races in Smithfield & later at Forrester Acres. He established Hillyard Stables, & was known for his gray horses. Winken Tim was one of his most successful runners. By his example Glen taught his whole family to love hard work & horsemanship. He loved dairy farming & continued to milk until he was in his eighties. Glen had a big heart & was always willing to help others. He had a great sense of humor, & made many lifelong friends. Glen was preceded in death by his wife Jacquelyn, his son-in-law Brian Andersen, & his grandson Cortney DeLoy Christensen. Funeral services will be held Monday, December 20, 2010 at 12 noon at the yellow brick church in Smithfield located at 179 North 100 East. Friends may call at Nelson Funeral Home, 85 South Main, Smithfield, Sunday evening from 6 to 8 p.m. and at the church on Monday from 10:30 to 11:30 a.m. Interment will be in the Smithfield City Cemetery.

Glen William Hillyard, also known as ?Crow?, died peacefully of natural causes in his home, surrounded by his family on Monday, Dec. 13, 2010. He was born on the homestead at the base of Crow Mountain North of Smithfield, Utah on Dec. 15, 1923.... View Obituary & Service Information

The family of Glen William Hillyard created this Life Tributes page to make it easy to share your memories.