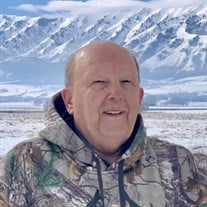 Glen Kraus was called on a mission to serve on the other side of the vail following a courageous battle with prostate cancer that metastasized to the lungs, bones and brain. Glen was the third child of seven born to Ralph Vernon Kraus and Judith Marion Leskow. Glen spent most of his elementary school years in North Logan, his Jr High school years in Newton, attending North Cache Jr High, Grauduating from Sky View in 1969. He attended Steven's Henager College in Ogden for 18 months, studying marketing/ business administration. Glen worked for several farmers in Newton and DelMonte during Summer vacations, becoming skilled at driving the combine, pea picker, and other heavy duty equipment. He met his wife, Julie Smith, at Sky View his senior year, after he gave her a note to meet at his locker at noon. They courted for years until being sealed on July 28th, 1972 in the Logan Temple of the Church of Jesus Christ of Latter Day Saints. Glen's favorite times were spent with his beautiful "favorite" daughter Stefanie Lynn (1974) and his handsome "favorite" son Brian Glen (1976). He was later blessed with 5 "amazing" grandsons and a lovely "favorite" Grandaughter. Glen attended Army National Guard Basic Training at Fort Dix, New Jersey and Technical training at Camp Lee in Petersburg, VA in 1971, obtaining the rank of Specialist E-5, over-seeing supply and munitions. Glen was always the friendly face seen by his customers at Valley Discount, Grand Central, and as a delivery driver at Cream O'Weber, from which he retired after 30 years. Glen also drove for Swift Transportation, Western Dairyman's Transport, Rich Thompson Transportation (RTTI) and Miller Brothers' (Super T) Transportation. Glen operated B&G Honey which was a "sweet treat" because his son, Brian, and he managed it together, thus "B" and "G" Honey. They packaged honey and delivered it toghether to businesses across the Wasatch front to some Great Harvest Bakeries, Chuck O'Ramas, and others. Glen and Brian developed a choice relationship from this and his wood cutting business. Glen enjoyed hunting, fishing, four-wheeling, camping with his family and following the six grandchildren to scouting events, soccer games, swim meets, dance recitals, track meets, band/ orchesta/ music concerts and other activities. Glen was an active member of the Church of Jesus Christ of Latter-Day Saint, holding positions he enjoyed as First Counselor of the Bishopric, Ward Clerk, positions in the High Priest Quorum, and as a Home Minister. He loved sending inspirational letters to the missionaries. His father, grandparents, Arnold and Hermanie Kraus, sister Nancy (Charles) Woodward, William and Ida Leskow, Uncle Wille Leskow, Aunt Elizabeth (Charles) Graha) Dora (Raynold) Petersen preceded him in death. He is survived by his wife Julie, daughter Stefanie (David Duce) , son Brian (Tracy), grandchildren Wyatt and Joey Kraus, Dylan, Colton, Justin, and Hunter Duce, brothers Robert (Marsha), Douglas (Nancy), Sisters Peggy Fisher (Dave), Sue Ann (Charles) Jones and Joyce (James) Godbey, Sister-in-law Ruth (WInston) Watts Numerous Nieces and Nephews, aunts and uncles and friends. Funeral Services will be held at 12 noon at Nelson Funeral Home in Logan, UT. A Viewing will be from 10:30 to 11:30 am on August 12. Interment will be at the Smithfield Cemetary. A zoom meeting is available for those who can not attend https://us02web.zoom.us/j/81550496129 In lieu of flowers contributions can be made to any Altabank in his honor under the name of Julie Kraus. Condolences & memories may be shared online at www.nelsonfuneralhome.com

Glen Kraus was called on a mission to serve on the other side of the vail following a courageous battle with prostate cancer that metastasized to the lungs, bones and brain. Glen was the third child of seven born to Ralph Vernon Kraus and Judith... View Obituary & Service Information

The family of Glen Kraus created this Life Tributes page to make it easy to share your memories.

Glen Kraus was called on a mission to serve on the other side...

Send flowers to the Kraus family.