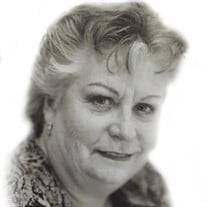 Gloria Lay Kirk Pettingill, passed away July 7, 2015 surrounded by loved ones after a valiant fight with cancer. Gloria was born March 26, 1933 in Escalante, Utah to Charles Winford and Eleanor Clora Lay. She was the third of five children, and the only one with fiery, red hair. She had a very happy childhood in Richfield, Utah with many joyous memories and made life long friends. Gloria married K Leslie Kirk in 1951 in the Salt Lake City Temple. They were blessed with 7 beautiful children. Her life was her family. She absolutely loved being a mom. Her husband’s profession was serving in the Army, which took them to different states and countries. In 1973 they divorced and Gloria later married Clifford Ray Pettingill in 1978 where they were later sealed in the Logan Temple. Gloria worked several labor jobs but felt compelled to start her own day care center named Grandma’s Place and was known as GRANDMA GLORIA. Throughout the 28 years of operating her business she taught and nurtured thousands and generations of children who even to this day would stop her on the street to say, “Thank you, Grandma Gloria for the simple, but meaningful life skill of respecting and loving others.” Her life mission was to be a mother and grandmother. She has 20 grandchildren and 37 great grandchildren with each having personal memories with GRANDMA GLORIA. Gloria loved and lived life to the fullest--- always finding the positive in the world and especially in people. Gloria will be missed by so many, but has left a lasting impression on their lives. Gloria loved to dance and now she is dancing with angels. She is survived by her husband Clifford Ray Pettingill, sisters Beverly Pinncock, brother Marlin (Heidi) Lay, and five children, Jeff (Diane) Kirk, Julie Grinder, David Kirk, Karen (Matt) Jensen, and John (Lisa) Kirk. Three step children Paige (Jerry) Allen, Ondre Pettingill, and Jeannie McClain. She is preceded in death by her parents, sister Betty Willis, brother Michael Lay, son Kim (Linda) Kirk, a daughter Gloria K Kirk, son-in-law Hank (Julie) Grinder, and great granddaughter Allie Kay Larsen. We would like to express appreciation to Marci, Holly, and Julie with CNS Home Health & Hospice and nurses at Logan Regional Hospital for their dedication, compassion, and care of Gloria. Funeral services will be held Saturday, July 18, 2015 at 11:00 a.m. in the Smithfield South Stake Center, 451 South 250 East, Smithfield. Friends may call Friday evening, July 17 at the South Stake Center from 6 to 8 p.m. and also on Saturday from 9:30 to 10:30 a.m. Interment will be in the Smithfield City Cemetery. Condolences may be sent to the family online at www.nelsonfuneralhome.com.

Gloria Lay Kirk Pettingill, passed away July 7, 2015 surrounded by loved ones after a valiant fight with cancer. Gloria was born March 26, 1933 in Escalante, Utah to Charles Winford and Eleanor Clora Lay. She was the third of five children,... View Obituary & Service Information

The family of Gloria Lay Kirk Pettingill created this Life Tributes page to make it easy to share your memories.

Send flowers to the Pettingill family.