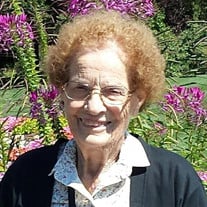 Gloria Columbine Ward, 90, passed away July 17, 2015 in Las Vegas, Nevada. She was born at home in Raymond, California to Charlie P. Roesbery and Henrietta Guillemin on September 7, 1924. She graduated from Raymond High School. Gloria married Perl Ward in 1944 in Reno, Nevada. They raised four children while they lived in Raymond. Two girls and two boys and had many adventures in beautiful California. In 1954 they started a new adventure and homesteaded 160 acres in Pahrump, Nevada and had two more boys. While raising six children and putting a lot of blood, sweat, and tears into the farm she drove the school bus and also became the Post Mistress at the Pahrump post office. Gloria did many jobs in between to help provide for her family including chopping and picking cotton. Her life was her children and she made time to go hiking, traveling, and horseback riding. She loved reading, genealogy, traveling the country for rocks and arrowheads, and also fishing on the ocean with her brother. Gloria instilled in her children a love for nature and family. After the passing of her husband in 1992 she moved to Richmond, Utah where she resided until her death in 2015. Gloria is preceded in death by her husband, Perl Elwood Ward; three siblings, Charlie Roesbery, Louise Gordon, and Adele Westmorland; also two sons-in-law, Jim Smith & Jim Cropper. She is survived by her six children, Sherrel Smith of Fresno, CA, Karen Cropper of Fresno, CA, Steve (Elaine) Ward of Richmond, UT, Tim (Lonnie) Ward of Las Vegas, NV, Brad (Cylene) Ward of Pahrump, NV, & Clint (Connie) Ward of Richmond, UT. She was pleased to have 9 grandchildren, 12 great-grandchildren, and 5 great-great-grandchildren. Funeral services will be held at 12:00 pm Thursday, July 23, at the Richmond Stake Center, 135 West Main Street, in Richmond, Utah. A viewing will be held Thursday, July 23 from 11:00 to 11:45 am prior to the services. Interment will follow at the Richmond City Cemetery. Condolences and memories may be expressed online at www.nelsonfuneralhome.com

The family of Gloria Columbine Ward created this Life Tributes page to make it easy to share your memories.

Send flowers to the Ward family.