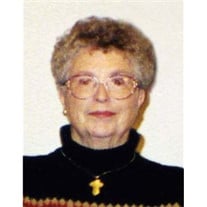 Grethe Hansen Hoffman, a long-time resident of Cache Valley, went to be with the Lord on September 7, 2009. Grethe was born in Velje, Denmark in 1927. As a child in Denmark, Grethe loved spending weekends and summers with her family at their beach house in Tralla, on the Velje Fjord. While attending an all-girls Catholic school, Grethe learned to master her life-long love of needlework. She also later attended business school. At the age of 24, Grethe boarded an ocean liner bound for America on a solo adventure that would take her to Utah to meet her true love, Arne Hansen. Arne and Grethe had met in Denmark years earlier, before he immigrated to the United States, and they kept up correspondence until she was able to come over and be his bride in 1951. As newlyweds, Arne and Grethe lived in Amalga while Arne worked for the Cache Valley Dairy. There, in 1954, they started their family which quickly grew to 4 boys in 6 years. In 1956, Arne and Grethe bought a house on Center Street in Logan, where Grethe lived for the next 29 years. Grethe always had a nice garden on the large lot behind their house. In the mid-60's, Arne and the boys used lumber from the old water tower behind the Borden Plant to build green houses on the lot. The "his" and "hers" greenhouses soon turned into "hers" and "hers" as Grethe's green thumb took over. Grethe had an incredible gift with plants and flowers. People would bring her plants that were all but dead and she would nurse them back to health. She especially enjoyed growing orchids and would make beautiful corsages for her friends, or supply them with blooms for weddings or other special occasions. St. Thomas Aquinas Catholic Church was frequently graced with beautiful arrangements made by Grethe with flowers from her home and garden. For many years Grethe ran a shop out of her home called "Gretta's Needlecraft". People would come from miles around to purchase the fine quality patterns, yarns, and materials Grethe imported from Denmark. Grethe was a skilled craftsman in all forms of handwork, and in her lifetime completed hundreds of beautiful works of art, most of which she gave away to family and friends. After a long struggle with illness, Arne passed away in 1981. Grethe filled her time volunteering for hospice, which had helped her out greatly with Arne. Through hospice, Grethe met Melvin Hoffman, a widower who was retired from the military. Grethe married Mel in 1985 and moved to his home in Smithfield. They were married until Mel's death in 1997. Grethe was preceded in death by her parents, Niels and Mia Lund-Jensen Denmark; brothers: Sven Denmark and Erik San Diego; and sister, Nancy Denmark. She is survived by her sister Inger Denmark, sons: Kim Terri, Steve Marilyn, Paul Shelly, and Robert Laureen, 14 grandchildren and 11 great grandchildren. Grethe accepted Jesus Christ as her Lord and Savior on Thanksgivng Day, 2008, so although we will miss her greatly, we are happy to celebrate her going home. The family wishes to thank those who have helped her at Legacy Assisted Living and Logan Nursing and Rehabilitation Center. Funeral services will be held at 11:00 a.m. Monday, September 14, 2009 at Nelson Funeral Home, 162 East 400 North, Logan. Friends and family may call Sunday evening from 6 to 8 p.m. and Monday morning from 9:30 to 10:30 a.m. prior to services. Interment will be in the Smithfield City Cemetery. Condolences may be extended to the family online at www.nelsonfuneralhome.com.

Grethe Hansen Hoffman, a long-time resident of Cache Valley, went to be with the Lord on September 7, 2009. Grethe was born in Velje, Denmark in 1927. As a child in Denmark, Grethe loved spending weekends and summers with her family at their... View Obituary & Service Information

The family of Grethe Martina Lund-Jensen Hansen Hoffman created this Life Tributes page to make it easy to share your memories.