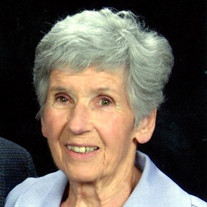 Our beloved mother, sister, aunt & grandmother passed through the veil on Sept. 15, 2018 at age 93, leaving a large void, but a wonderful legacy. Hanna Moser Zurcher was born on July 12, 1925 in Zuchwil, Solothurn, Switzerland to Emil & Johanna Moser. She was the oldest of five children. At 16, Hanna spent a year in the French part of Switzerland learning French. Then for a time, Hanna worked in a watch factory. During WWII she was offered a job at the LDS Mission Home in Basel, Switzerland. No missionaries nor supplies were sent to Switzerland during the war. The Mission President worked tirelessly to keep the church going. She was heavily involved as lessons and materials were copied by hand and then distributed. Hanna met Hans Zurcher at a town social where they danced together. Four years later they were married. Two daughters were born to them in Switzerland. After they came to America, two boys, one more daughter and eventually a foster daughter were added to the family. They leave a posterity of 27 grandchildren, 63 great grandchildren and 2 great-great grandchildren. Hanna was an expert knitter, a talent she developed in Switzerland. Also an accomplished seamstress, she made lovely clothes for herself and family. Hanna loved to cook and hosted many get-togethers for family and extended family over the years. She was an avid gardener and the entire neighborhood benefited from the produce they generously shared. Camping and hiking (particularly Tony Grove & Bear Lake) were activities they loved and have continued as family traditions. Hans and Hanna liked to travel to visit their children and grandchildren and they also made several trips to Switzerland to visit family, especially Hans’ family, who all reside in Switzerland. The Gospel and service were the center of their lives. A highlight of their lives was a call to serve a Mission in the Swiss Temple. This also afforded them an opportunity to strengthen ties with family as well as do some Family History. They met a Sister in the temple, who was a certified researcher, whom they hired to help them. The names they researched kept Hanna and Hans and the family busy doing family temple work for many years. They felt like they had served a 3 in 1 mission! Hanna has served in many ward and stake callings. She also served 2 years as a PTA President and was on the Planning and Zoning Board for Smithfield. One of her most memorable experiences was being called as a Trainer for the German Extraction program for the Church; a calling that lasted for 32 years. Many thousands of names were extracted by wonderful dedicated people. It brought great fulfillment to Hanna’s life and earned her many life-long friends. She is survived by a brother, Peter (Carol) Moser of San Antonio, Texas, 5 children, Ursula (Kyle) Jaussi of Smithfield, Ruth (Dennis) Worthen of Hyde Park, Paul (Joyce) Zurcher of Stillwater, OK, Charles (Arnett) Zurcher of Providence, Heidi (Robert) Sorenson of Alpine, UT, and 1 foster daughter, Vurlene Bowekaty of Mesa, AZ as well as 27 grandchildren, 63 great grandchildren and 2 great, great grandchildren. A viewing will be held on Friday, Sept. 21 at the Smithfield Nelson Funeral Home, 85 S Main from 6:00-8:00 p.m. and Saturday from 10:30-11:30 at the Smithfield 8th ward building at 130 W 400 N followed by her funeral at 12:00. The family wishes to express sincere thanks to the Logan Regional Hospital staff, Legacy House, Sunshine Terrace, Autumn Care and the IHC Hospice for their considerate and tender care. Condolences may be sent to the family online at www.nelsonfuneralhome.com.

Our beloved mother, sister, aunt & grandmother passed through the veil on Sept. 15, 2018 at age 93, leaving a large void, but a wonderful legacy. Hanna Moser Zurcher was born on July 12, 1925 in Zuchwil, Solothurn, Switzerland to Emil & Johanna... View Obituary & Service Information

The family of Hanna Moser Zurcher created this Life Tributes page to make it easy to share your memories.

Send flowers to the Zurcher family.