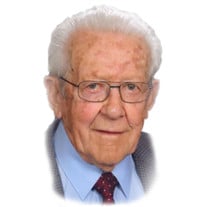 Our beloved husband, father, grandfather and great-grandfather, Hans Zurcher, left a legacy of a life faithfully lived as he departed from this life at his home in Smithfield on Sept. 17, 2014, at the age of 93. He was born in Lusslingen, Switzerland on July 21, 1921, to Frieda & Ernst Zurcher. Hans was the oldest child and was joined by four sisters. Switzerland's beauty beckoned to him and he loved and appreciated the outdoors, especially hiking and skiing in the Alps. He served as a member of the Red Cross, riding bicycles to assist in emergencies. His training and apprenticeship was in Heavy Steel Construction and Ornamental Iron Work. During WWII he served in the Swiss Army and though Switzerland was neutral, they were prepared to defend themselves. He remembers being stationed in the mountains and watching Hitler's troops.On May 30, 1947, he married his sweetheart, Hanna Moser, a marriage that was later solemnized in the Logan Temple after they immigrated to America in 1950. Settling in Cache Valley, he used his training while working at Wangsgaard Heating and Air Conditioning for 20 years. In 1970, he started his own business, formerly known as Valley Metal Shop located in Smithfield. He worked on many homes, church buildings, schools as well as on the Logan Temple.He was a convert to the Church of Jesus Christ of Latter-day Saints and served faithfully and diligently in many Church callings. A highlight of their life was serving a mission in the Swiss Temple. Not only did they serve in the temple but were able to do much genealogy for Hans's family and were blessed to associate with his family, who all reside in Switzerland. He maintained a beautiful yard, garden and orchard which was generously shared with family and friends.He is survived by his wife, Hanna Moser, two sisters, Lisa Hans Luginbuhl and Rosemarie Heins Mathys, five children, Ursula Kyle Jaussi of Smithfield, Ruth Dennis Worthen of Hyde Park, Paul Joyce Zurcher of Stillwater, Oklahoma, Charles Arnett Zurcher of Providence, Heidi Robert Sorenson of Alpine, Utah, and one foster daughter, Vurlene Notsinneh Bowekaty of Mesa, Arizona, as well as 27 grandchildren and 54 great-grandchildren. A viewing will be from 6:30-8 p.m. Friday, Sept. 19, at the Nelson Funeral Home at 85 S. Main, Smithfield. The funeral will be at noon Saturday, Sept. 20, in the Smithfield 8th ward chapel at 155 W. 400 North, with a viewing prior at the church from 10:30 to 11:30 a.m. Condolences may be sent to the family online at www.nelsonfuneralhome.com

Our beloved husband, father, grandfather and great-grandfather, Hans Zurcher, left a legacy of a life faithfully lived as he departed from this life at his home in Smithfield on Sept. 17, 2014, at the age of 93. He was born in Lusslingen, Switzerland... View Obituary & Service Information

The family of Hans Zurcher created this Life Tributes page to make it easy to share your memories.

Send flowers to the Zurcher family.