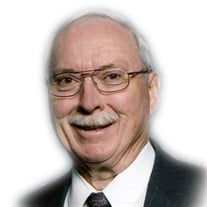 Harry Emerson Leavenworth of Hyrum, Utah, born the third son of Ebeni and Llora Leavenworth on September 29, 1929 in Bridgeport, Washington was 90 years old when he graduated mortality. He often joked in his later years that he was waiting for his birth certificate to expire. It finally did on October 1, 2019. He long maintained that there was no correlation between his birth and the collapse of the stock market the following October. He grew up mostly in rural areas and enjoyed many favorite pastimes such as swimming, hiking, star gazing, woodcutting and exploring the great outdoors. When he was 13 years old his family moved to Oregon and throughout his school years he attended 8 different grade schools. In high school he was on the wrestling and track teams and in the senior class play. He graduated from Gresham Union High School in 1948. On August 18, 1950 he married Betty Louise Smith in Vancouver, Washington and together they had seven children. In September of 1957 they were baptized members of The Church of Jesus Christ of Latter-day Saints and a year later on June 23, 1958, their family was sealed in the Idaho Falls Temple. They were later divorced in 1974. On February 14, 1976 Harry married Claudia Egan in Gresham, Oregon and together they had a son. For most of his adult life Harry worked as a baker and retired in 1995. In addition to the bakery, he worked in a furniture factory, a dairy, and for the Oregon State Fish Commission. To further his education, he also attended Portland State University night classes, University of Oregon and Washington State Extension programs. He enjoyed sports, particularly swimming, boxing, wrestling, track, football and basketball. He also had a love of music and enjoyed writing poetry. Harry served for over 40 years in the Boy Scouts of America. One of his first church callings was that of an assistant scout master. This was the beginning of a lifelong love for and involvement in scouting. He served as scout master four times, a Cub Master, a Webelos leader three times, and several times on the Scout Committee. He loved campouts and hikes and attended several national jamborees. For his distinguished service in scouting he was presented the Silver Beaver, a council-level distinguished service award and one of the highest awards of the Boy Scouts of America. After retirement he and Claudia eventually moved to Utah and have happily made their home in Hyrum for the past 21 years. For many years Harry’s idea of a dream home included a fireplace, a shower and a view of Mount Hood, Oregon. He was an avid fan of the Portland Trailblazers but when asked if his move to Utah was a difficult transition he said, “When I left Oregon I said, goodbye Trailblazers, hello Jazz!” Harry had a love of people and enjoyed serving and getting to know others. In the community he served on the Hood River County school board and the Portland YMCA board of directors, delivered Meals on Wheels and volunteered at Sunshine Terrace Nursing Home. In addition to his many years of scouting, some of his other church callings include serving as a High Priest Group Leader, ward missionary and participating in the Family History Name Extraction Program. Together with Claudia, they served as church service missionaries for the Logan Employment Center, full time missionaries in the Oregon Eugene Mission, and ordinance workers in the Logan temple. Harry was preceded in death by his parents, his brother Charles, a grandson and 3 great grandchildren. He is survived by his wife, Claudia, his children, Lois Goodwin, Gary Leavenworth, Celia and Lin Huish, Paul and Shelly Leavenworth, Mary and Carl Larsen, Rose Marie and Robert Cameron, Mark Leavenworth, Steven and Sabrina Leavenworth, his many grandchildren and great-grand children, and his brother, David Leavenworth and sister, Lois Shelley. Funeral services will be held Tuesday, October 8 at the Hyrum 15th ward building at 100 South 450 East, Hyrum, Ut. at 12:00pm. A viewing will be held from 9:30-11:30am. Interment will be at the Hyrum City Cemetery. Condolences and thoughts may be expressed online at www.nelsonfuneralhom.com. In lieu of flowers please make online donations through the Humanitarian Fund on the LDS Philanthropies website. We wish to give a special thank you for the loving care of the staff of Encompass Healthcare and Hospice; Dr. Kevin Duke, Alex, Logan, Heidi, Bell, Larry and Marilyn. Thank you also to all the friends who visited Harry and brightened his day.

Harry Emerson Leavenworth of Hyrum, Utah, born the third son of Ebeni and Llora Leavenworth on September 29, 1929 in Bridgeport, Washington was 90 years old when he graduated mortality. He often joked in his later years that he was waiting... View Obituary & Service Information

The family of Harry E. Leavenworth created this Life Tributes page to make it easy to share your memories.

Send flowers to the Leavenworth family.