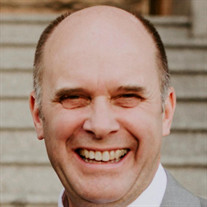 Heber Matthew “Matt” Perry passed away on April 24, 2021, in Logan, Utah, due to complications from pancreatic cancer. Matt was born on December 22, 1960, in Polson, Mont., to Bob and Maxine Perry as the third of five children. The family moved to Oylen, Minn., where he grew up on a dairy farm and graduated from Staples High School in 1979. Following high school, Matt attended Brigham Young University in Provo, Utah, for one year before serving as a missionary for The Church of Jesus Christ of Latter-day Saints on the Navajo Reservation in Holbrook, Ariz. He loved the people he served and remembered those times with fondness. Upon concluding his two-year mission, he returned to BYU where he eventually met his eternal sweetheart, Julie Opager, while working as early-morning janitors in the library. On August 21, 1984, they were married in the Salt Lake City Temple for time and all eternity. Matt graduated from BYU with a Bachelor’s in History in 1985 and a Master’s of Public Administration in 1987. His first job following graduate school led Matt and Julie to Lakeport, Calif., where they raised their family. In Lakeport, he worked for County of Lake as an administrative analyst and retired 28 years later as Chief Administrative Officer. He enjoyed advocating for how local government could make a real impact in people’s lives. In 2016, Matt and his wife retired to Cache Valley, Utah, where he also worked in human resources for Utah State University. A man of service, Matt fulfilled his call to serve in many roles in the Church of Jesus Christ including a counselor to five bishops, sunday school teacher, regional church leadership positions and personal minister to look after the needs of individuals and families in the local congregation. While living and working in Lakeport, Matt enjoyed a wealth of close personal and professional relationships and associations. One of his most cherished opportunities was serving the youth as a young men’s leader and also as a scoutmaster for 9 years in Troop 39 of the Boy Scouts of America. He supported and facilitated numerous young men in achieving the rank of Eagle Scout, but most importantly, he demonstrated a stalwart commitment to living values while having fun. He taught young men that the hard work to achieve a goal is “well worth it” -- even if it was finishing a steep climb on a mountain or long hike to enjoy the post-event treat at Taco Bell or wherever the young men wanted to go. The young men hold many of these memories close to their hearts because they knew Matt cared about them. He was known for acting younger than his age as he played tackle mud football with the youth until he was nearly 50 years old. A committed and engaged father, his interests and hobbies included anything that could bring him closer to his family: attending sports games, traveling, hiking, working on home improvement projects and coaching his children’s soccer teams. A devout follower of Jesus Christ, he demonstrated a humble approach to life. Even as his cancer progressed, he pondered what he was supposed to learn from living with his terminal illness and how he could show faith in God. He is survived by his wife of over 36 years, Julie Perry; his mother Maxine Perry; his children McKay (Keri) Perry, Ashley (Jace) Smellie, and Chandler Perry; his siblings Teresa (Gary) Bentz, Joan (Duane) Ash, Mark (Wendie) Perry, Karen (Dan) Schueller; and his granddaughters Elizabeth, Margaret, Lydia, and Sloane. Those who knew and loved Matt will always remember his kind heart, his willingness to serve and his devoted love of the restored gospel of Jesus Christ. He lived his life as a true disciple of Christ, and his family believes and knows that he continues that discipleship on the other side. He passed away in his home surrounded by his loving family. In lieu of flowers, please consider a donation to the Pancreatic Cancer Action Network or a local food bank in your area. Funeral services will be held in-person on Saturday, May 1, at 10 a.m. MDT at the Henry’s Point Ward Chapel, 680 South 1250 West, Logan, Utah 84321. Masks and social distancing will be observed. Friends and family are invited to a viewing at 9 a.m., and interment will be at the Logan City Cemetery following the services. The funeral will also be broadcast on Zoom. To receive access to the link, please fill out this form and we will send you an email with the meeting link and passcode. Get Funeral Zoom Link: bit.ly/MattPerryFuneral

The family of Heber Matthew 'Matt' Perry created this Life Tributes page to make it easy to share your memories.

Send flowers to the Perry family.