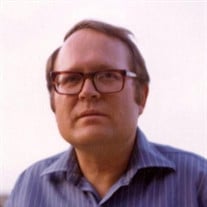 Herman Vance Nelson was born on October 8, 1935 in Tucson, Arizona. Herman returned to his heavenly home on October 30, 2021 in the Birch Creek Assisted Living facility in Smithfield, Utah. Herman is preceded in death by his parents, Vance and Joy Nelson, his brother, James Leon Nelson, his sister, Susan Nelson Dolph, and his daughter, Sara Nelson. Herman is survived by his wife Patricia Nelson, sister Karen (Jim) Downs, his sister-in-law Lynette Switzer, his sons Harllee Nelson, Eric (Lesle) Nelson, Zane (Teresa) Nelson, his daughter Amy (Niles) Oien), his daughter-in-law Diane Stump and his daughter-in-law Charee Nelson. He is also survived by his 17 grandchildren and 8 great-grandchildren. Herman lived a full, productive and rewarding life. Herman grew up in Binghampton, a suburb of Tucson, Arizona, which had many members of the church living there. His grandparents, Regina Young and Hyrum & Cloe Nelson, lived nearby. When Herman was 8 years old, he was chosen to join the Tucson Boys Choir and performed across the United States. He played the trombone in his Junior and High School bands and was even asked to lead the band at his graduation ceremony from Tucson High School. Music was a big part of Herman’s life and his rich, bass voice contributed to many church choirs over the years. He loved to listen to bluegrass, dixieland and especially Louis Armstrong. Herman joined the Army, serving 3 years, stationed at Fort Polk, Louisiana. While serving in the Army, Herman auditioned for and made the U.S. Army Band, played the trombone in the Mardi Gras Parade and was even featured in “Ripley’s Believe it or Not” for being in the first Army Jeep Band. Herman studied at the University of Arizona, graduating with a degree in Accounting. While attending the University of Arizona and the Church Institute on campus, he met the love of his life, Patricia. They were married in the Mesa Arizona Temple and were married for nearly 60 years. Herman worked the majority of his professional career as a systems accountant for the Department of Defense and the Department of Interior in California, Virginia and Colorado. Herman and Pat lived in Colorado for 37 years. Herman loved to do 4H as a kid and raised many bunnies and goats, winning many awards at the Pima County Fair. He loved his pets throughout his life and was very close to them. He had many beloved dogs over the years, a couple of cats, and even a housebroken, pet pig at one time. He loved good food and incredibly, could remember meals he had enjoyed even from many years ago. Herman was an avid gardener and kept his children busy helping with his large, fruitful gardens! He also loved to hunt deer & elk with his dad and brother, and later with his sons. He also kept very busy with constant projects around the house. When living in the mountains in Colorado, he kept his kids and anyone that he could recruit to help, raking the never ending piles of dead pine needles all around the house for fire mitigation. Herman also loved ordering junk from Publisher’s Clearing House and was very proud of the time he actually won a prize – a $10 check! As a member of the Church of Jesus Christ of Latter-day Saints, he served in many capacities, including a full time mission to the Northwest States, as the first Bishop of the Manassas ward in Virginia, and in various other leadership positions in California, Virginia and Colorado. He served wherever he was called to serve and did his best to fulfill whichever calling he was given. He remained faithful all of his life and his testimony of the Savior and his devotion to serve Him was an example to all. Herman was very much loved in his life and will be missed dearly. But we also rejoice knowing he has been reunited with his loved ones again, including his daughter Sara, who passed away less than 2 months prior, his mom, dad, brother and sister, and his beloved pets, amongst others that were waiting for him. We look forward to the day when we will see him again. A viewing will be held Saturday, November 6th from 12:30-1:30 PM at the Church of Jesus Christ of Latter-day Saints at 12832 N 1200 E, Cove, UT 84320. Funeral services will follow in the chapel of the Cove Church Building from 2:00-3:00 PM. The burial will be in the Richmond, UT cemetery at 350 N 200 W following the funeral. Services are viewable using the following link. Password "Nelson": https://www.google.com/url?q=https://us02web.zoom.us/j/87332007347?pwd%3DcG9iSk1XdWJndThUQlhDNnd4MzY3Zz09&sa=D&source=calendar&usd=2&usg=AOvVaw3DTN0ISDmTVs4S12YyQD59

Herman Vance Nelson was born on October 8, 1935 in Tucson, Arizona. Herman returned to his heavenly home on October 30, 2021 in the Birch Creek Assisted Living facility in Smithfield, Utah. Herman is preceded in death by his parents, Vance and... View Obituary & Service Information

Send flowers to the Nelson family.