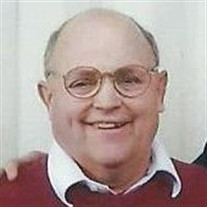 On the evening of June 24, 2017, Howard Matthews Draper passed away peacefully. He was born in Logan, Utah on January 29, 1950 to Carroll Isaac Draper and Wilma Austin. He grew up in North Logan and graduated from Sky View High School. After high school, he served an LDS mission in Pennsylvania. Years later, during a family vacation to Pennsylvania he enjoyed sharing stories about his mission and the area. Howard also attended Utah Technical College to learn the electrician’s trade. Much of Howard’s working life was spent in the employment of the telephone company US West, later to be known as Qwest and now CenturyLink. His role there took him all over the Salt Lake Valley. Howard was sealed to Peggy Ann Warner on March 9, 1979 in the Salt Lake Temple. They had two sons together, Adam and Blake. Howard and Peggy later divorced in 2002, but have remained friends. Howard enjoyed gardening and cooking, and everyone loved his barbecue turkey which he perfected from a family recipe. For years, he used a plate of barbecue turkey to help pay a family friend for preparing his tax returns, as well as for Christmas gifts. He was a Utah State Aggies fan and enjoyed taking his family to Aggie football games. He also rooted for the Utah Jazz. Howard loved spending time with his grandchildren, and he spoke of them to almost everyone, whether it was a family member, friend, or someone he was meeting for the first time. If he won any treats from bingo or elsewhere, they would always end up with the grandkids. Howard was preceded in death by his parents, his stepmother Glenna Draper, and his brother Bruce (KayeLene) Draper. Howard is survived by his sons Adam Draper and Blake (Michelle) Draper and grandchildren Garrett, Cameron, and Autumn. He is also survived by his siblings, Kathleen Noble, Stuart (Vickie) Draper, Ross (Karla) Draper, James (Shelia) Draper, Michael Draper, Kristine (Jon) Howell, Scott (Kate) Draper, Kathryn (Dennis) Welker, Steve (Karren) Mitchell, Janet (Jerry) Larson, Peggy Neuber, and Karen (Allan) Loyborg. Howard’s family would like to thank the staff at the Lodge at Jordan River for their assistance to and care of Howard over the past several years. Funeral services will be held on June 30, 2017 at Nelson Funeral Home (162 East 400 North, Logan, UT). A visitation will be held from 10:30-11:30 AM followed by the services at 12:00 PM. Interment will be in the Logan City Cemetery (1200 East 1000 North).

On the evening of June 24, 2017, Howard Matthews Draper passed away peacefully. He was born in Logan, Utah on January 29, 1950 to Carroll Isaac Draper and Wilma Austin. He grew up in North Logan and graduated from Sky View High School. After... View Obituary & Service Information

The family of Howard Matthews Draper created this Life Tributes page to make it easy to share your memories.

Send flowers to the Draper family.