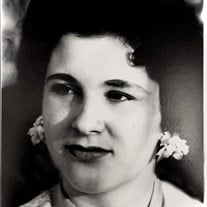 IlaRee was born in Ogden, UT, the daughter of Merlyn and Ethel Mae Rose Jackson. She passed away in her home in Hyde Park on December 6, 2019, surrounded by her family. IlaRee spent her childhood years in Tremonton, and after graduating from Bear River High School, spent two years in Hawaii before marrying the love of her life, Gerald Reese. Gerald and IlaRee were blessed with four children, and raising their family in the love of the Savior was their first priority. They lived in Jekyll Island, Georgia, Logan, Utah, Albuquerque, New Mexico, and spent most of the time raising their family in Tehachapi, California. She developed many talents and gifts, including teaching herself to play the accordion, guitar, piano, and Klavinova. She tirelessly worked to build a home in which to raise their young children that was a bit of heaven. Her influence extended to all aspects, including designing the floor plan, landscaping, and decorating, always improving and bettering whatever home she was in. IlaRee lived a life of love and service. As a mother, she was devoted in teaching her children in the gospel, the power of prayer, and all necessary virtues. She was a tireless missionary, showing the blessings of the gospel through service, teaching, and example. IlaRee was a much-loved wife, mother, grandmother, aunt, daughter, and friend to all. She is preceded in death by her brother, Larry Jackson and sister, Baby Jackson, and is survived by her loving and devoted husband, L. Gerald Reese, her children Jack, Randy, Teresa, and ValaRee, and her grandchildren, Kristoffer, Erik, Gregar, Alyssa, Audrey, Isabel, Susanna, and Giuliette, as well as her sisters Betty and Kaylene. Her loving and guiding hand will be missed and celebrated. Services will include a viewing at Nelson Funeral Home, 162 East 400 North in Logan on Friday, December 13 from 6:00 p.m. to 8:00 p.m., with a viewing on Saturday December 14 at 9:00 a.m. , followed by the service at 11:00 a.m. at the Hyde Park Chapel at 63 East Center Street.

IlaRee was born in Ogden, UT, the daughter of Merlyn and Ethel Mae Rose Jackson. She passed away in her home in Hyde Park on December 6, 2019, surrounded by her family. IlaRee spent her childhood years in Tremonton, and after graduating from... View Obituary & Service Information

The family of IlaRee Jackson Reese created this Life Tributes page to make it easy to share your memories.

IlaRee was born in Ogden, UT, the daughter of Merlyn and Ethel...

Send flowers to the Reese family.