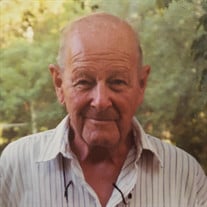 Ira Don Tibbitts, 84, passed from this life to a better one at 7:42am the morning of April 12, 2019. He will be remembered for his unrelenting work ethic (no matter how cold or inclement the weather), his commitment to doing the job better than the “right” way, his quiet acts of service to others, and most importantly for the time he spent with his family including his grandchildren and great-grandchildren. In addition to his witty personality, he was admirably stubborn, even so bold to openly challenge societal norms and authorities. Yet, his heart was soft as butter, and sometimes he’d even get misty-eyed when it came to what mattered most to him. Born 22 October 1934 as the third of four children to Ira James and Emma Wynona Corbridge Tibbitts, he shared a birthday with his older sister Cleo who was born 3 years prior. As a young boy, he enjoyed toy train sets and once walked from his Providence home to downtown Logan to purchase his own. On 13 July 1953, he married Ronda Deon Clegg (daughter of Tomas and Thelma Jenks Clegg) in the Logan Temple of The Church of Jesus Christ of Latter-Day Saints. They were blessed with six children, three boys and three girls who kept them on their toes and brought many wonderful experiences to the family. Fond memories were made hunting, camping, and working together in the yard and garden. After his day job, Don would return home and often work in the garden until dark. But he also knew how to make work “fun” – in the Fall, he would hide candy bars among the leaves for his children to find as they helped rake. Ira Don always tried to do his best, and he served his fellowmen in many ways throughout his life, such as helping with home electrical projects, generously sharing his garden produce, or simply just sitting and talking. He served in various Church callings, but one he especially enjoyed was Ward Clerk for the Logan 17th Ward. He regularly attended worship services and had a love for the hymns. A highlight was the annual Fathers and Sons outing where he and his boys would go camping and shooting. Additionally, his grandchildren remember the high priority he placed on being at special events like baby blessings, baptisms, graduations, marriages, etc… He almost always had one or two cameras on hand to document the event. For his career, Ira Don labored as an electrician and was integral to many large commercial projects both outside of and within Cache Valley, including the Spectrum Sports Arena at Utah State University. Once he nearly fell from the ceiling of the Spectrum, but instead used his large, strong hands to pull himself back to safety in the rafters. He miraculously avoided falling to treacherous exposed rebar below, a fall that likely would have been fatal. In leisure time beyond gardening, Don also enjoyed photography and would develop professional-quality photographs in the darkroom he built in his basement. He loved the mountains, collecting stamps and unique coins, and regularly gave minted coins in all their varieties as birthday gifts. Mountain Dew and butter were his token staples, practically defining a part of his character. Most of all, he loved his family and spending time with them wherever their adventures led. Ira Don is survived by his younger sister Deanna Tibbitts Brizzee of Rexburg Idaho; children Ira LaRon (Patrice) Tibbitts of Henderson Nevada, Lornel (Sylvia) Tibbitts of Logan, Marty (Connie) Tibbitts of Providence, Lorie Tibbitts of Logan, Linda Christensen (Doug) of Idaho Falls, and Charmon Tibbitts of Idaho Falls; 15 grand children, many great-grandchildren, and even a few great-great-grandchildren. He was preceded in death by his parents, wife Ronda, sisters Wilma and Cleo, and daughter-in-law Jeanne M. Campbell Tibbitts. Per his request, a simple graveside service will be held Monday April 15th, 2019 at 11am at the Providence Utah Cemetery where his body will be interred adjacent to his parents.

Ira Don Tibbitts, 84, passed from this life to a better one at 7:42am the morning of April 12, 2019. He will be remembered for his unrelenting work ethic (no matter how cold or inclement the weather), his commitment to doing the job better than... View Obituary & Service Information

The family of Ira Don Tibbitts created this Life Tributes page to make it easy to share your memories.

Ira Don Tibbitts, 84, passed from this life to a better one at...

Send flowers to the Tibbitts family.