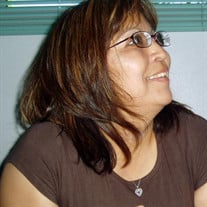 Isabelle Slowman Toledo, 63, of Smithfield, UT, passed away, Oct. 24, 2019, with her family by her side. Isabelle (Izzy) was born to Sam Lansing Slowman Sr. and Nusbah (Mary) John Slowman on April 16, 1956, in Sweetwater, AZ. Izzy spent some of her schooling with her Peterson family in Wheatridge, CO. Thereafter, Izzy lived with the Andrus family and graduated from Kamas South Summit High School in Kamas, UT. She received an associate degree and her Practical Nursing License from Brigham Young University (BYU), UT in 1976. At BYU, she met her sweetheart and the love of her life, Richardson Yazzie Toledo. Richardson and Isabelle were married on Nov. 12, 1976. While married, she worked for about twenty-four years as an LPN in several hospitals throughout Utah. Izzy and Richardson were married for forty-two years and they lived in Smithfield, UT for thirty-two years. Izzy is survived by her loving and devoted husband, Richardson, her four children: Keshena Toledo Brooks, Skyler (Tori) Toledo, Chelise (Benjamin) Elwood, and Shayla (Jason) Bowles, and her six grandchildren who she adored: Brooke, Elsie, Drake, Meka, Addikai, and Kelaih, her loving brothers and sisters: Sam Slowman Jr., Arnold (Rita) Slowman, Alfred Slowman, Roy (Thelma) Slowman, and Dorothy (Ben) Zurita, and many nieces, nephews, and cousins. She is also survived by Carole Peterson, Luann (Guy) Flanagan, Jody (Walt) Fulroth, Larry Peterson, Russell (Rebecca) Peterson, and Lynette (Jason) George. Izzy was preceded by Raymond Lansing Slowman in 2016 and Larry Peterson in 2015. Isabelle has touched so many lives with her love and motherly care. She opened her arms and heart to everyone that was brought into her path. Izzy was immensely proud of her family, and leaves behind nothing but beautiful memories. Her family along with many others mourn her as they have lost a gentle and radiant soul.

Isabelle Slowman Toledo, 63, of Smithfield, UT, passed away, Oct. 24, 2019, with her family by her side. Isabelle (Izzy) was born to Sam Lansing Slowman Sr. and Nusbah (Mary) John Slowman on April 16, 1956, in Sweetwater, AZ. Izzy spent some... View Obituary & Service Information

The family of Isabelle Slowman Toledo created this Life Tributes page to make it easy to share your memories.

Send flowers to the Toledo family.