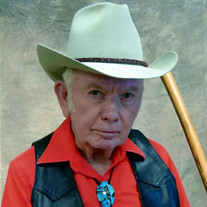 J’Wayne McArthur, or the man commonly known as Mac, passed from this mortal life on July 27th. He was 83 years old and had used all the strength his body had to offer in fighting against Parkinson’s Disease. He came into this world on a Halloween evening in 1935 to the proud parents, John Wayne and Ruby McArthur. He was very spoiled and well cared for as he was an only child. As a child his days were spent in Utah, Idaho and Wyoming. Due to the economy of the time his parents often relocated for work. This gave him many opportunities to explore the world around him. A couple of summers were spent living out of tents in Yellowstone Park while his father worked on the construction crew building the roads. As he began his education most of his days were spent in the Idaho Falls area. Most of his days at school were spent daydreaming. He had one passion that overtook him as a child, the horse and the western lifestyle. He was hooked at the introduction to his first horse, Buttons. The only things that kept him in high school were boxing, track and the annual beard growing contest. After graduating high school, he enlisted in the US Army. He returned two years later, as a veteran of the Korean War. Soon after returning he and Jolene Jones were married and, on their way, to starting a life together. They had four children Terri, Kelly, Sandie and Shawn. The days of raising a family were spent in Kaysville and the Cache Valley. He was a student at Utah State University. This is where he put his cowboy daydreaming and new-found desire for education together. After earning a master’s degree in Ag Science and working for the federal government for a few years, he returned to USU with a proposal. In 1969 he proposed to the university to start a western equitation program. The proposal was accepted, and the race was on. His passion for this new program consumed most of his life. When he was not sharing his knowledge with his students or caring for his horses, he was often found writing one of his many books or poems. Many hours were also spent on hand crafting leather items and working the twisted wood of Island Park into the furniture he loved. In retirement he spent his seasons split between Star Valley, Wyoming and St George, Utah. In his retirement days he found joy in playing pool, cards, making new friends and helping those in need. He is survived by his four children: Terri (Jay) Pitcher Smithfield, UT; Kelly (Scott) Kozak Highlands Ranch, CO; Sandie Simmons (Brad) Bills North Logan, UT; Shawn (Jill) McArthur Wellsville, UT; 12 grandchildren and 19 great grandchildren. He was preceded in death by his wife Jolene. Graveside services will be held on Thursday August 1st, 2019 at 10:30 am in the Smithfield Cemetery. In lieu of flowers, the family requests that donations be made to the J’Wayne McArthur Family Scholarship Endowment at USU www.usu.edu/mcarthur. As a family we would like to thank all who cared for him in his last days. A great thanks is extended to CNS for the hospice care that was given. To Erin and Lacy, your kindness and compassion will never be forgotten. Condolences may be sent to the family at www.nelsonfuneralhome.com.

J&#8217;Wayne McArthur, or the man commonly known as Mac, passed from this mortal life on July 27th. He was 83 years old and had used all the strength his body had to offer in fighting against Parkinson&#8217;s Disease. He came into this world... View Obituary & Service Information

The family of J'Wayne McArthur created this Life Tributes page to make it easy to share your memories.

J’Wayne McArthur, or the man commonly known as Mac, passed from...

Send flowers to the McArthur family.