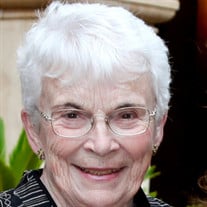 Jalaine Pitcher Jensen passed away peacefully in Logan, Utah, on October 6, 2017, surrounded by family members. Jalaine was born in Smithfield on January 6, 1933. She was the second of five children born to Roy and Rae Watson Pitcher. She grew up in the little victorian-style house at 6th South and Main Street in Smithfield. The big old pine tree in the yard there has been a landmark for the turnoff to Sky View for many years now. Jalaine remembered when it was planted and how she loved to run and jump over it. She went to elementary and junior high school in Smithfield, and graduated from North Cache High School in Richmond. She grew up helping on the family farm and one of her jobs was to take the work horses to the pasture at the end of the day, with her cousin, Orvid. They would each ride one of the horses. After awhile, they started racing on the big old horses. Her father was very unhappy with her because work horses are not supposed to like to race. During high school, she worked at a drive-in in Smithfield as a carhop, and one day she had two difficult customers in a jeep who only ordered water. The driver was Paul Jensen and his brother Scott was with him. Jalaine was very polite when they ordered only water at first, but they honked the horn again and again and ordered more water, then more and more water. Finally Jalaine brought them a huge pitcher of water so they’d quit bothering her. She found out later that they were pouring it out the drain on the floor of their old jeep, so they could talk to her more. After several years of dating, and a long time apart while Paul was in the US Army in Europe, they were married in the Logan LDS temple on June 29, 1953, and moved to Trenton, where they purchased and operated the family farm, which was a great joy to both of them. They were very proud that they were eventually able to purchase back most of the land that Paul’s grandfather had originally bought in 1919. Jalaine also worked at Logan Optical as a receptionist and eyeglass adjuster for several years until their only child, Paula, was born. When Paula was ready for Kindergarten, Jalaine decided to go to Utah State University to become a teacher. Despite her worries about being too old at thirty-three, and too busy with family, she earned a BS, Magna Cum Laude, and an MS, both in Child Development and worked as a teacher at the preschool on the USU campus for two years, then became a teacher at Summit Elementary School in Smithfield, and later at Sunrise Elementary School in Smithfield. She taught third grade one year, and second grade for 29 more years. For many years, every child in her classroom got to choose a big pumpkin from a pickup load of pumpkins that Paul and Jalaine grew on their farm and took to school. She received several awards during her career. She received a KSL Radio teacher recognition award. For this award she had to be nominated by parents. This award that recognized her ability to teach all students with many and varied needs. She also received a Cache County school District teacher of the year award. For this award she was nominated by her peers as an exemplary educator. Jalaine truly never met a child she didn’t love, and was never happier than when helping a child become a better reader. Jalaine and Paul were happy to have more time in their retirement to spend time with their farm and their family. For many years, a favorite project was raising Scottish Highlander cattle. Their original plan was to sell the cattle for beef, but soon, the cattle became big, expensive pets. Best of all they loved having time to spend with their grandchildren, Isaac and Ian Goodfellow, and they traveled to several different states to visit them over the years. Ian and Isaac both spent several weeks each year on the farm in Trenton. Recently, Jalaine was thrilled about the birth of her first great-grandchild, Dante Flori Goodfellow, last November. She was a wonderful mother, grandmother and great-grandmother. She enjoyed spending time with her family most of all, and we could always count on her full support. She is survived by her daughter, Paula (Val) Goodfellow of Encinitas, CA; grandson Ian Goodfellow (Daniela) and their baby, Dante, of Mountain View, California, and grandson Isaac Goodfellow (Ashley Waldron) of Vancouver, Washington; siblings Bonnie Jenkins (Kaysville); Darla Toone (Lynn) of North Logan; David L. Pitcher (LaDonna) of Smithfield; and Becky Johnson (Kim) of Logan, Utah. She was preceded in death by her parents and her husband, Paul.. A viewing will be held from 6:30 to 8 p.m. Tuesday, October 10, at Nelson Funeral Home, 85 South Main in Smithfield, Utah. Funeral services are at 11 a.m. Wednesday, October 11, at the Trenton Ward chapel, 1200 North 400 West in Trenton, Bishop Mark Adams presiding. There will a viewing from 9:30 to 10:30 a.m. at the church. Interment will be at the Trenton Cemetery. Condolences may be shared with the family at www.nelsonfuneralhome.com. The family wishes to thank Sunshine Terrace for the excellent, tender care she has received in the last few weeks. We’d also like to thank the many people who did so much to help Jalaine live in her own home as long as possible, particularly the staff from ComforCare, especially Bruce, Leslie, Jill and Taylor; Rocky Mountain Hospice, and our kind friends and neighbors, Cory, Stephanie, Brindee, Haylee, Brodee and Howdee; Rita and Arlene; Reatha and Drew; Pauline; Mary Ann; Lisa and Mike; Wanda and Billy and LaMar and LaDonna. In lieu of flowers, the family suggests contributions to the Sunshine Terrace Foundation: http://www.sunshineterrace.net/donate/

Jalaine Pitcher Jensen passed away peacefully in Logan, Utah, on October 6, 2017, surrounded by family members. Jalaine was born in Smithfield on January 6, 1933. She was the second of five children born to Roy and Rae Watson Pitcher. She grew... View Obituary & Service Information

The family of Jalaine Pitcher Jensen created this Life Tributes page to make it easy to share your memories.