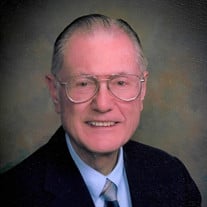 Our beloved husband, father, grandfather and great-grandfather James C. Hoffman, 89, passed away peacefully in his sleep on January 3, 2021 in Provo, Utah. Jim was born on February 27, 1931 to Edward Hoffman and Lillian Andersen Hoffman in... View Obituary & Service Information

The family of James Casper Hoffman created this Life Tributes page to make it easy to share your memories.

Send flowers to the Hoffman family.