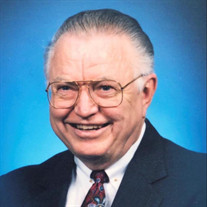 James Theodore Johnson, esteemed son, husband, father, grandfather, and great grandfather, passed away peacefully at home from natural causes Easter Sunday, April 4, 2021 at the age of 93. He was born in Lewistown, Montana on December 27, 1927, the sixth of eight children. He was raised on a ranch in Deerfield, Montana where his family grew crops, raised animals, and gardened fruits and vegetables. He lived by a rule he learned from his father who said to him, “Jim, I’ve always had a rule for myself. Now that I get up nights (to work at one point in town), I set the alarm clock for the absolute time that I must get up and then when it rings my feet are hitting the floor before I turn it off.” He learned hard work on the ranch, as well as adventure, and simple living of the Great Depression era. His work ethic and sense of adventure would remain with him through his life. It was in Lewistown that his mother came in contact with missionaries of the Church of Jesus Christ of Latter-Day Saints, and he would decide to join and be baptized in 1941. Jim graduated from Fergus High School in Lewistown in 1945. From 1945-47 he was enlisted in the US army and joined the 82nd Airborne Division and later the 11th Airborne Division in the paratrooper and glider infantry. He served a church mission for three years in Brussels, Belgium and Paris, France after his enlistment. He met LaJean Van Orden at Idaho State University and they were married on April 10, 1953. During their life together, James’ career would take them all over the world. He worked as a US capitol policeman in Washington DC before becoming a US Foreign Service Officer in the State Department diplomatic corps. Assignments in the Foreign Service included work in the educational exchange of the State Department, US Embassy General Service Officer in Baghdad, Iraq, Consular Officer in Nairobi, Kenya, Political Officer in Damascus, Syria, Graduate study at Columbia University in New York City while on sabbatical in Atlantic affairs, Economic affairs in the State Department in Wash DC., Civil operations and rural development advisor in Vietnam, Embassy Economic Officer in Taipei, Taiwan, Political advisor to the U.S. Joint Chiefs of Staff at the Pentagon, and at the State Department in the Office for Combating Terrorism. He also served in a number of church positions including Bishop in Washington DC and in Silver Spring, MD, Branch President in Taipei, Taiwan, Washington DC Temple Assistant Recorder, Mission president in Paris, and Mission President counselor in New Caledonia. His sense of humor, optimistic outlook, and boundless energy will be greatly missed. He is survived by his wife LaJean (Van Orden), son Sam (Lee Higham), daughter-in-law Marlene (Fine), son Spencer (Amy Fox), son Roger (Teja Braker), and daughter LJ Boseman (Derrick), 14 grandchildren, 18 great grandchildren, and one great-great grandchild. He is preceded in death by his son Nathan Johnson and his parents Edna Flossye (Warnke) Johnson and Guy Karl Johnson and his two sisters and five brothers. The funeral will be held Saturday, April 24 at 12pm at Nelson Funeral Home (162 E 400 N) with a viewing prior from 10:30-11:30. The funeral will be followed by a graveside dedication at 1pm at the Providence City Cemetery. Nelson Funeral Home is inviting you to a scheduled Zoom meeting.

The family of James Theodore Johnson created this Life Tributes page to make it easy to share your memories.