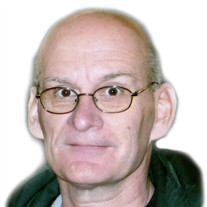 Our beloved father, brother, uncle and companion James Martin McGaughey passed away peacefully surrounded by loved ones on Thursday, May 18, 2017. He was born July 28, 1952 in Huntington Park, CA to Mary Lorraine Maughan and Morris Dixon McGaughey. He moved to Logan, UT in 1970 and resided there until his death. He married Gerry Merrill December 14, 1973 in the Logan Temple. They were later divorced, but out of this union he received what he called one of his greatest joys, his twin daughters Jennifer and Stephanie. He found love again after many years with Denece. He was a loving and devoted sweet man who always took care of Denece and were animals. Dad loved to camp, hike, fly fish and the outdoors. In addition, he loved animals, painting watercolors and photography. Some of his favorite spots were Flaming Gorge, Logan Canyon and his secret fishing spot on the Logan River. Dad was hardworking and served many people throughout his life. He never had sons, but adopted many through the Scouting program. He had many memories of hikes and camp outs with the boys. Even though he experienced much physical pain in the last several years, Dad never stopped enjoying life and serving others around him whenever he had the opportunity. For the last several years, he has volunteered countless hours for Meals On Wheels and doing pet therapy at Williamsburg Retirement Home. He is survived by his daughters Jennifer and Stephanie, brothers Joe Commerford, David McGaughey, John Bishop, sister Donna Hart, many nieces and nephews, his beloved lady Denece Miller and many precious pets. He was preceded in death by his parents. A visitation will be held at Nelson Funeral Home 162 East 400 North in Logan, Ut on Tuesday, May 23, 2017 from 6-8 pm. A graveside memorial service will be held at Logan City Cemetery 1000 North 1200 E Logan, UT on Thursday, May 24, 2017 at 11am. Jim, we love you to the moon and back!

Our beloved father, brother, uncle and companion James Martin McGaughey passed away peacefully surrounded by loved ones on Thursday, May 18, 2017. He was born July 28, 1952 in Huntington Park, CA to Mary Lorraine Maughan and Morris Dixon McGaughey.... View Obituary & Service Information

The family of James Martin McGaughey created this Life Tributes page to make it easy to share your memories.

Send flowers to the McGaughey family.